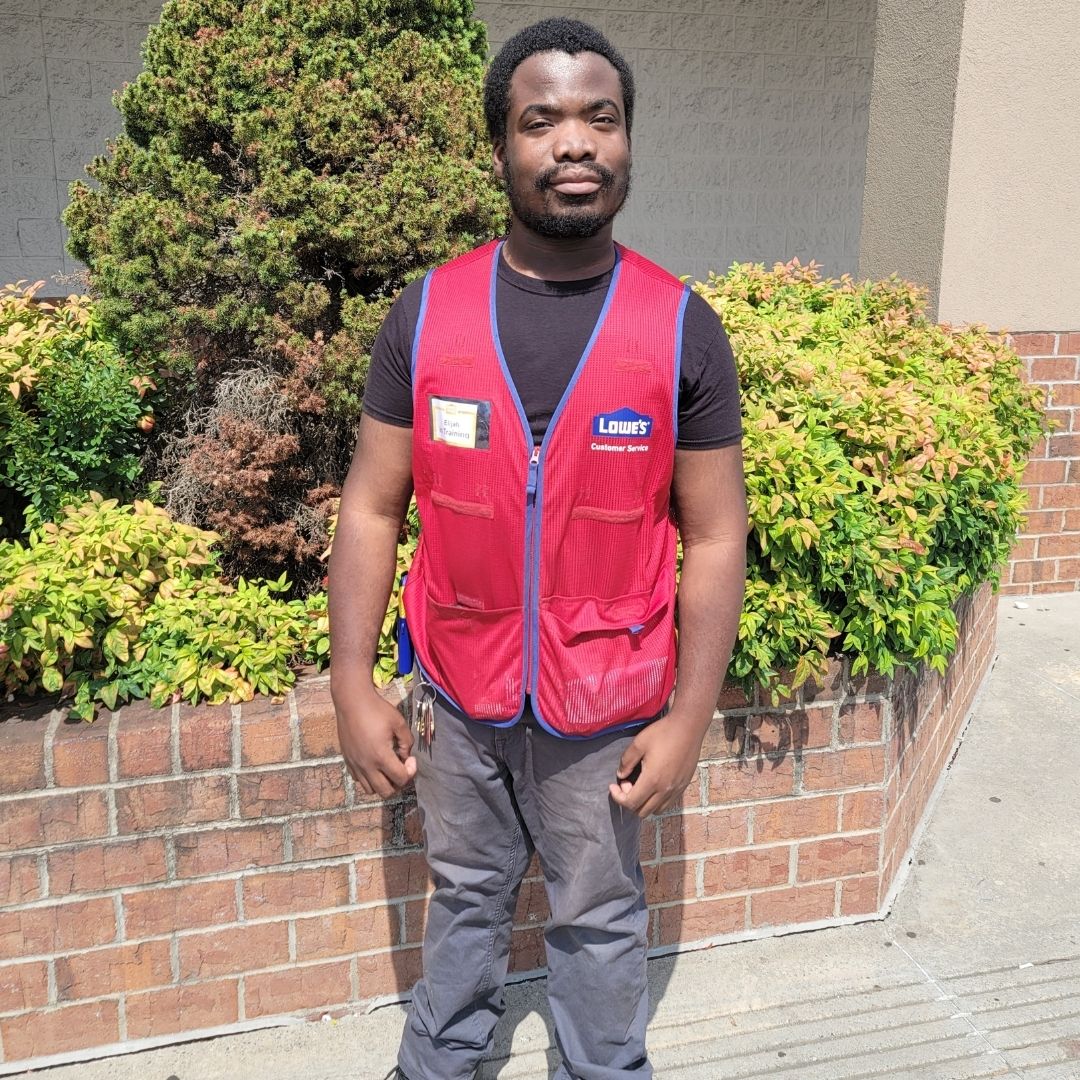 Elijah White, who completed Monarch’s Enhanced Services Intensive In-home Services program, achieved one of the goals he set for himself of securing and maintaining employment.

He was a few steps away from being told to leave the only family and home he had known. He couldn’t control the way he communicated which was by yelling, cursing and physical aggression. Any little thing would set him off.

He was referred to Monarch’s Enhanced Services Intensive In-Home Services (IIHS) through another community agency where he was receiving similar services.

IIHS is a six-month program that assists a family during a child’s mental health crisis. IIHS team members visit with the family and provide support in the home to create an environment for success. The youth’s behavior is managed and assistance provided to empower families in developing problem-solving skills and accessing community resources. Children as young as 3 years old through 20 years of age are served in the program.

The Importance of Trust

Rivers explained that the first step was establishing Elijah’s trust. “We started by building his trust and that meant talking to him, being calm and allowing him to have control of the session in the beginning, allowing him to communicate what is he feeling,” she explained. “It was important for our staff to be true to their promises of services and when we said we were going to be there, we were there.”

Elijah admits that it is difficult for him to trust others but the IIHS team made him feel comfortable. “They kept it real and didn’t sugarcoat anything. If you are honest with me, that makes me trust you,” he confided.

Elijah wanted help. His anger and outbursts, coupled with skipping classes, caused him to repeat his sophomore year of high school. He had difficulty focusing. As he turned 18, he wanted to achieve life goals such as securing employment, earning his GED and living independently.

Rivers explained that the staff remained calm at all times when meeting, even if Elijah was not. They taught him how to use Cognitive Behavioral Therapy techniques which included meditation, breathing techniques and taking time to stop and think before reacting.

The IIHS team began to see the effects of these techniques as Elijah began to incorporate them into his behavior. “It was delightful. Elijah brought the news back to us and he was so excited about it. It is a great feeling to see that what you are doing is having an effect,” Rivers remarked, adding that his family began to take notice, too.

Elijah completed receiving IIHS services in May and currently receives medication management and Enhanced Services’ Individual Placement and Support through Monarch. He is also working at Lowe’s home improvement retailer and proud of his ability to maintain employment. 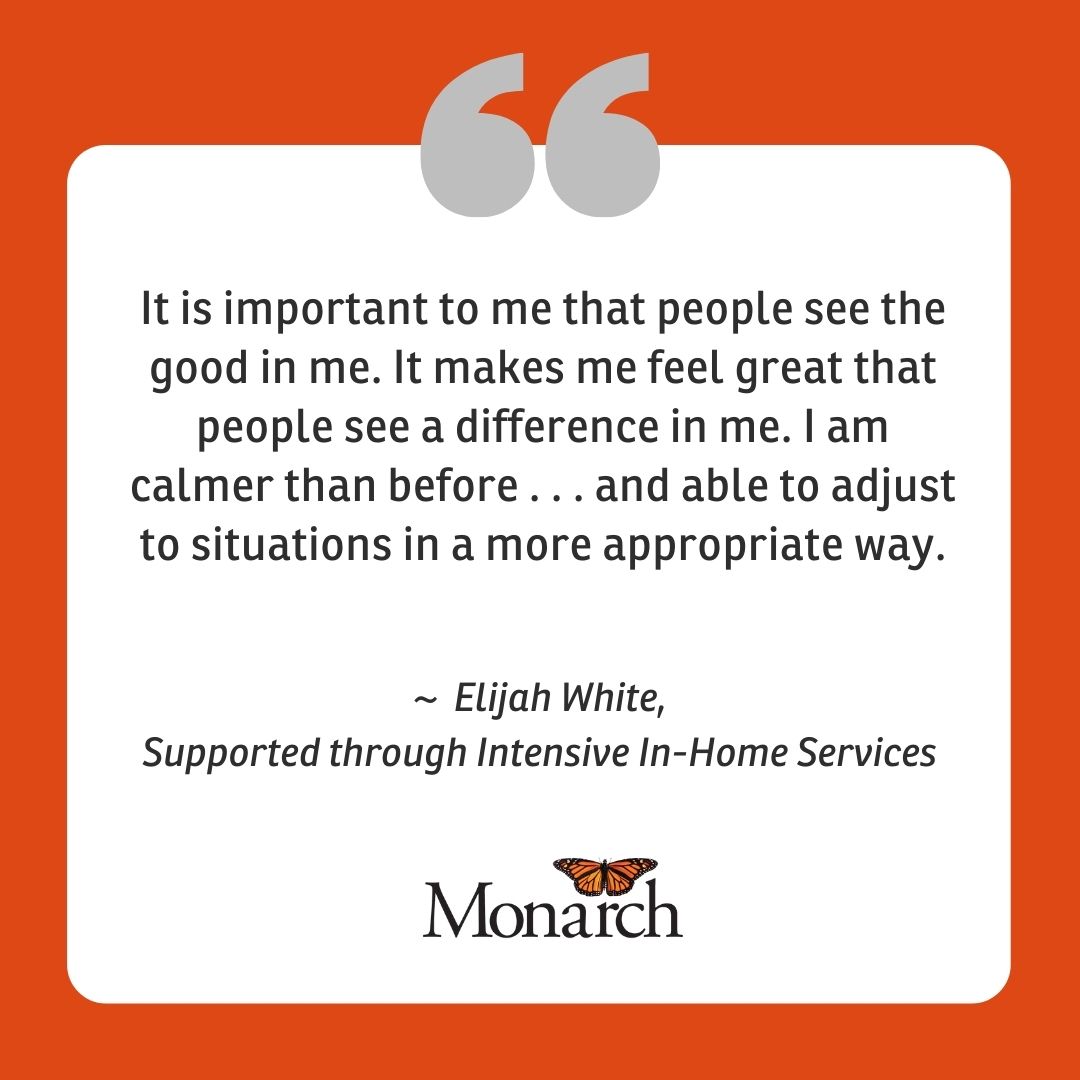 Looking Toward the Future

Elijah is energized about his job and knows that doing the physical work in combination with the responsibility of employment will assist in his recovery. “They actually wanted me to succeed and that is what I really like,” he said about the IIHS team who helped him.

Rivers hope for Elijah is heartfelt: “I am hoping he continues to use the strategies and skills he has learned and not revert back . . . I hope he communicates his thoughts and feelings in an appropriate manner. Elijah has met so many expectations it is amazing to see where he is today.”

Elijah is grateful for the services he received through IIHS and realizes he was “not going down a good path.”

“It is important to me that people see the good in me. It makes me feel great that people see a difference in me. I am calmer than before  . . . and able to adjust to situations in a more appropriate way,” Elijah said of his progress.

For more information about IIHS services and other mental health services, visit www.MonarchNC.org or call (866) 272-7826.

Monarch22 hours ago
"I love to see the people that we serve receive the help and services that they need. It is rewarding to see the progress that they make while with under our care and being able to see our services working.” Want to #LoveWhatYouDo, too? We're #Hiring! Visit: http://ow.ly/Y5NJ50Hp3pR #Jobs #Recruiting #MentalHealth #MentalHealthAwareness

Monarch3 days ago
Weather Update: We have behavioral health locations that will be closed or operate under a delayed opening schedule on Tuesday, January 18 due to inclement weather or staffing conditions.

Monarch3 days ago
At the heart of our mission is #Helping others. Our staff across #NorthCarolina strives each day to provide excellent care for adults and children with #MentalIllness, intellectual and developmental disabilities and substance use disorders, help them overcome obstacles and reach their goals. To honor the #MLK legacy, consider ways to help others in your life. #MartinLutherKing #IHaveADream #Love #MartinLutherKingJrDay #MLKJr #Freedom

Monarch6 days ago
Please note that our behavioral health outpatient clinics, day programs and offices across #NorthCarolina will be closed on Monday, January 17 to honor Dr. Martin Luther King, Jr., Day. We will resume regular business hours on Tuesday, January 18. For details about our services please visit, www.MonarchNC.org. Thank you! #MLKDay