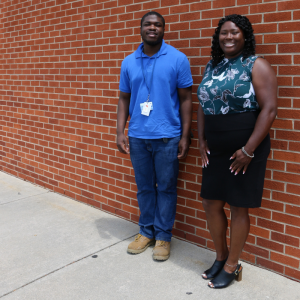 Zhequan McInnis’ blue lanyard hangs from his neck displaying his staff credentials as a Goodwill Industries employee. Obtaining a job has brought about significant changes in his life.

“I feel great. I am happy to have responsibilities. I am a person who is energetic and likes to do things,” McInnis, 21, described himself.

IPS Employment Support Specialist Juanita Davis, who has helped McInnis find and secure employment during the past year, agreed that his successes have brought about life-changing improvements.

Initially diagnosed with schizophrenia at age 20, McInnis found dealing with the responsibilities of young adult life difficult. The death of his maternal grandfather, who was like a father to him, caused a downturn. A hospital stay caused McInnis to lose a fast-food job. He wanted more out of life.

With the help of the Bellemeade Crisis Center staff, a continuum of care was established creating a clear path to personal and professional success for McInnis. Therapy, medication management and employment services helped open doors for McInnis that he had previously found closed.

During therapy, after expressing the desire to find a job, he was referred to the Individual Placement and Support – Supported Employment (IPS-SE) team at Bellemeade and connected with Davis. She showed him options to better navigate the road to adulthood.

McInnis was accepted into Goodwill’s 12-week job training program allowing him to work in a different department every three weeks. Today, McInnis is a Goodwill associate at the Greensboro store location on South Eugene Street, not far from the Belllemeade Crisis Center, and responsible for moving totes and merchandise containers, working on the store’s donation dock and sorting items among other tasks.

“It has changed his entire life. It has shifted his confidence and his self-image has changed. He goes to social outings and the arcade,” Davis shared. “He has joined the YMCA and become more interested in his physical health. Everything has fallen into place for him.”

With his newfound confidence, McInnis is more likely to state what he wants out of life. “He has become an advocate for himself. Once you learn your value, strengths and skills, you speak up for yourself,” Davis said.

McInnis is grateful for the Monarch services he has received and the helping hand extended by the IPS staff, especially Davis: “I am thankful for her help. Now, I don’t feel the effects of my mental health problems, and I have found friends.”

His new friendships through Goodwill have motivated McInnis to return to sketching and graphic design. With the help of his co-worker Joseph, McInnis is creating an animated comic. Looking ahead to the future and continuing on the road to adult independence, McInnis is researching options so that he may live independently in an apartment.

Photo caption: At right, Zhequan McInnis, is with IPS Employment Support Specialist Juanita Davis, outside the Greensboro Goodwill before he returns to work for an afternoon shift.