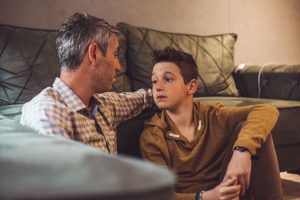 Just the thought of going back to school is enough to cause anxiety for many young people and their parents, especially when the transition involves a different school with new people and an unfamiliar environment.

The change from a summer schedule, back into a new routine with added expectations is one that everyone involved can be mindful of and take some proactive approaches to reduce the levels of anxiety.

“The people we support are individuals with the same preferences, anxieties and anticipations as everyone else, but sometimes those can be amplified because they have a pretty accurate view of the environment, which isn’t always as accommodating to them as it should be,” said Amanda Matthews, a psychologist at Monarch.

For parents, being as proactive as possible during summer months is important. Talking with their children about what their feelings are and being open with them to come up with real solutions is one way to get a head start. It’s also important to consider peer pressure and the fact that it doesn’t stop when school is out. Checking in with them regularly is crucial to identifying what ongoing triggers may be happening in the summer that can carry over into the school year.

“We’re all so busy with our different schedules and plans, it’s so easy to just get into the routine of dropping the kids off at their summer camps, their social engagements or athletic competitions and not really check in with them,” said Matthews. “The social circles and pressures are still happening during the summer, talking behind the back, rumors or indirect aggression doesn’t stop in the summer.”

The most appropriate way for parents to bring these topics up depends on the child. The more time parents spend with their child, the better they can know them, understand them and communicate with them more effectively.

“You have to have that foundation and rapport with your child. If you don’t have that, the child is going to view attempts to communicate as trying to sneak into their business and they’ll get more secretive,” said Matthews. “Giving them time and letting them know, they’re the experts, they need to teach the parents what they’re experiencing.”

According to the Child Mind Institute, anxiety associated with going to school can manifest in physical symptoms as well. If stomachaches and headaches, for example, persist even after the possibility of a medical problem has been cleared, it could be a sign on an anxiety disorder. For example:

Matthews also says it’s important to note that a diagnosis can become a label, but it’s important to remember that every person regardless of their diagnosis is an individual. People with the same clinical diagnosis can be very different people in their thoughts, their feelings and their behavior. Helping the child’s school staff and teachers understand this as well is just as important. Meeting with teachers and communicating a child’s specialized needs can be done in the summer months, just as it can during the school year.

“Make sure that they’re not falling into the trap of labeling individuals. Just because a child can’t do one thing well, doesn’t mean they can’t do another thing well,” said Matthews. “Rehearse with your child the one, two, or three points they’d like to get across and what they would find helpful. Maybe even have them write those down and bring them to the meeting, so you can really tackle what’s most important and show that they shouldn’t be labeled based on a clinical diagnosis.”