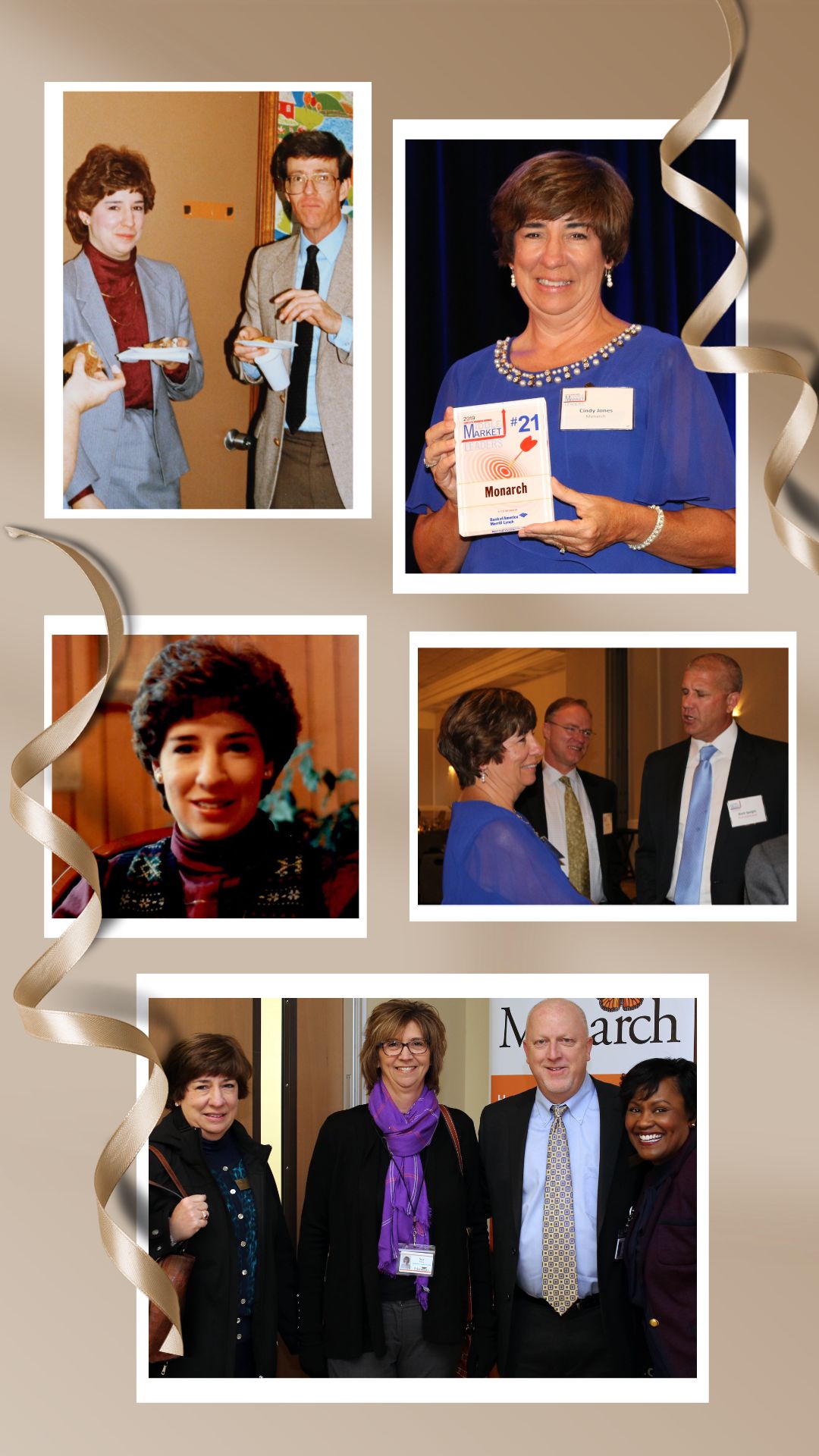 Clockwise: Cindy receives the Charlotte Business Journal’s Middle Market Leader award in 2019; celebrating receiving the award with staff and board members; Cindy shown with Sue Redman, Andy Basinger and Natasha Suber; at the offices on Greenwood Street; and, celebrating in her early years at Monarch.

A lot has changed since 1984, globally, nationally and at Monarch.

As Cindy prepares to retire as Monarch’s Executive Vice President and Chief Financial Officer after 38 years (currently the longest tenured staff member), she reflects on over three decades of changes and service to a nonprofit that she says was dear to her heart before she even began. She has been working with Monarch’s new EVP CFO Tammy Geis who will be taking over the role upon her retirement.

Before graduating from high school, Cindy, like many other young adults her age, had career aspirations to become a teacher. At the time, the education field was flooded with candidates so she decided to pursue an accounting degree.

“I took an accounting class in high school with an amazing teacher who inspired us and taught us by building real life skills. While teaching the basics of accounting and finance, our main project involved creating our own company, investing funds in the stock market, and maintaining the accounting records for our company,” she explains.

Read more below as Cindy offers her perspective on serving people in need starting as a small Stanly County agency and growing into today’s statewide organization serving over 30,000 people annually, how working at a nonprofit has impacted her life and what her future holds.

Looking back, what do you recall about your first years at Monarch and in what roles did you serve?
Wow, so many memories along with so many people who have made a life-long impression for me here at Monarch. I could write a book. Everyone has a story as they say, and while some here at Monarch know my story, many do not.

I became involved with Monarch and ARC Services when I was a teenager, helping at Camp Lotsafun, the Youth Arc and Special Olympics. At the age of 20, my sister, Susan, who was served by Monarch, was killed in a car accident five months before I came to work at Monarch.

She worked at the Badin store and did other things through the Monarch day program. Monarch has always had a special place in my heart. I still see friends of hers that she worked alongside, and to this day they still ask about my family and tell me how much they miss her. I can only imagine what she would be doing today with the progress we have made over the years toward helping individuals live and work independently.

As for my early years at Monarch, we were a small agency with a budget of $1 million my first year, which included Stanly Industrial Services (SIS), Greenwood Center, the Chivington home, Valleyview, East Main and we were building on Anderson Road.

I was hired as the Finance Director, however, I wore many hats early on. My office was at the Greenwood Center, our inclusive developmental day care center. This office was originally an observatory room, so right in front of my desk was a large window looking into a classroom of three- and four-year-old children. Trying to focus and work with financial information was quite the challenge.

Monarch was always growing even early on and began moving into surrounding counties along with adding new services and programs. Our largest growth years resulted when Local Management Entities (LMEs) / Managed Care Organizations (MCOs) began transitioning direct care service lines they were managing to private providers and when we added our Behavioral Health Service line, which has now grown to 50 percent of the budget. As Monarch grew, the finance team grew as well. What started with one person in 1984 has grown to 22 individuals. Lori Maness was the first person to join my team, and what a journey the two of us have traveled over the last 28 years.

How differently does Monarch 1984 differ from Monarch 2022?
Monarch leaders and volunteers, were always paving the way to grow, meet more needs and to help empower individuals to meet their goals and dreams. We have grown from having a small number of programs and sites in 1984, to over 200 sites and programs, with their own budget and services, along with a total agency budget of $104 million. One thing that hasn’t changed. Monarch is always trying to make a difference and impact the people we serve by advocating and improving services, education and public knowledge of what we do. 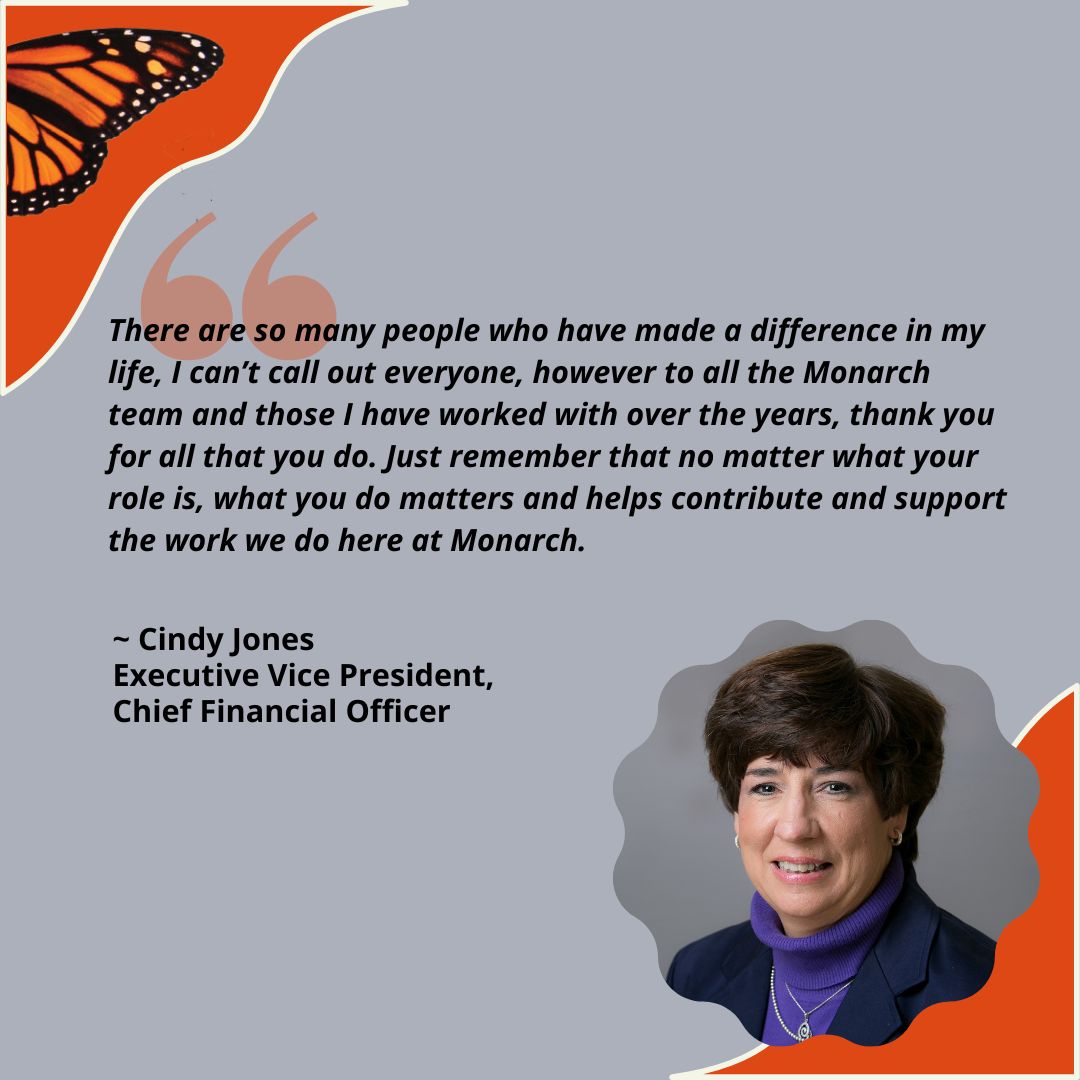 Monarch serves the most vulnerable members of our communities. What does it mean to you to have made an impact on how our services are provided to the people we support?
I believe we all have a purpose and can make a difference in the world. It is rewarding to know that in some small way I helped Monarch meet the needs of members in our communities who need us. I believe in our mission and that each person should be able to live their best life.

As your career continued at Monarch, what motivated you?
My primary motivation obviously came from working for an agency with an impactful mission and service desire. Additionally, my motivation for continuing to work at Monarch also came from the people I worked alongside of every day, as well as growing and learning new things along the way.

With Medicaid and state services, there were constant changes, new services, new rules and regulations. Life was never the same or boring. Monarch also believes in family values and that family comes first. This is huge for me.

Please share a funny or impactful story that has happened during your time at Monarch.
Monarch was connected to the computer system of Stanly County early on and depended on their IT department and system for support. In the heat of the summers, the system would go down which I determined had to be the heat. During this time, I worked in the office of Stanly County’s Information Technology department. I finally asked where the lines went into the ground and we had those checked, however there was no resolution. I decided to try pouring cool water on the ground where the lines went in, and to everyone’s amazement and disbelief, it worked. So, during the heat of the summer, I watered the computer lines.

What is the most impactful professional advice that you received that you personally find motivating?
Everyone has a story, and you never know what someone else is going through, so treat everyone with respect and kindness. Also, learn something every day.

What are you looking forward to the most about retirement and what are your plans for the near future?
I am looking forward to spending more time with my family, church, and friends and traveling. I would like to volunteer, maybe even do some substitute teaching, working with photos and creating videos.

What is your hope for the Monarch of the future?
I hope Monarch will continue to make an impact not only in the communities we serve statewide however grow and expand to multiple states. I hope Monarch will always strive the be the very best, value staff and individuals supported first and follow their mission. Last but not least, focus on being financially sound, stay true to their values, always be honest, ethical and kind.

Cindy offered a note of thanks to all who has assisted her through her service at Monarch, giving mentions to the following: her husband, Richard, daughter, Suzanne, and son, Matt; the Finance team; Monarch President and CEO Peggy Terhune; Executive Vice President and Chief Administrative Officer Terri Bernhardt; Vice President Finance, Controller Lori Maness; Legal Counsel Nicole Gardner; former Monarch staff, Jim Kelley and Sue Redman; and Monarch Board members who volunteered their time and financial support through the years.