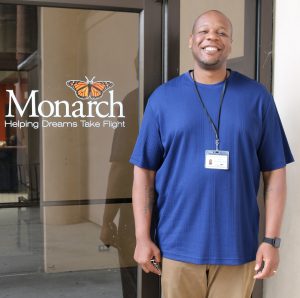 As a peer support specialist, Amin Norris assists the people we support to achieve their career goals. Many are learning to live with mental health issues, overcoming substance use disorders or working through a variety of barriers like homelessness that can make maintaining a job difficult.

Norris can empathize with the individuals he serves. He has walked in their shoes.

Norris has worked with the Assertive Community Treatment Team (ACTT) at the Bellemeade Crisis Center in Greensboro for the past year, was uncertain he could reach goals he had set for himself. After receiving a bachelor’s degree in Early Childhood Education Norris was faced with multiple personal barriers.

In December 2005, law enforcement pulled Norris over during a traffic stop and was found possessing a controlled substance.

While the charges were making their way through the Texas judicial system, Norris, a talented, six-foot-seven-inch basketball player who had already competed in college and professionally, was invited and accepted another professional contract to again compete overseas. Finally, in 2008, he was convicted and sentenced, entering the Texas Department of Criminal Justice to serve five-and-a-half years.

His dreams, and life as he knew it, were temporarily put on hold.

Released in 2013, Norris worked briefly for a distribution company in New Jersey and reconnected with a previous sweetheart, Iyanna, who is now his wife. The couple moved to the Greensboro area in 2017 and Norris set out to find a job. He longed for a job that was more fulfilling than the warehouse role.

He called the training “eye-opening” about helping him face past trauma.

“My dad struggled with alcohol and drugs my entire life and would eventually die of an overdose. I gained a deeper understanding of what he went through listening to stories from my fellow graduates,” Norris said of the training which also helped him understand co-occurring disorders, which is individuals who have substance use disorders as well as mental health disorders.

ACTT Team Leader Carol Wilson who oversees Norris’ team said her teammate is very likeable, able to quickly build rapport with others and is an asset to the team. “Amin doesn’t hide his story. He can tell people we support not only what they have to lose but what they have to gain as well,” she said.

Norris is proud of the people we support, their achievements and the daily work they dedicate themselves to in reaching aspirations: “My goal is to make them as independent as possible. I try to assist them with whatever goals they set. Do they want to work toward independent living? I can help them.”

Norris shared the struggle and success of a mother he counseled who succeeded in getting her life back on track. She regained guardianship of her child while conquering depression, anxiety and other mental health issues. “You feel a sense of accomplishment. You are just happy that she is able to re-establish her life,” Norris shared.

“This is an authentic job. There is no faking. If there is no connection, there is no opening up,” he said of the relationship between the person supported and the peer support specialist.

Last October, Norris received the Michael W. Haley Graduate of the Year Award bestowed by Goodwill Industries of Central North Carolina. The award recognizes participants who have made positive changes in their lives through new career choices.

Norris continues to set goals for himself. Last month he completed an additional Monarch training for peer support specialist and he is currently researching what is needed to become a licensed clinical social worker through a nearby university.