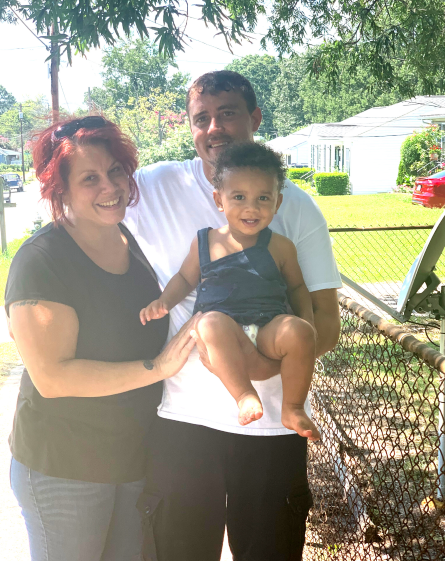 photo: Nelson McCoss pictured with his fiancé and child

Nelson McCoss has learned how to manage a mental health diagnosis, maintain employment and secure a residence. Today, he is thriving and doing well in his full-time job, engaged to be married and father to a young son.

McCoss received assistance in reaching his life goals through services from the Bellemeade Behavioral Health location in Greensboro. McCoss was paired with Employment Support Professional Shantina Hinton, who is part of the Individual Placement and Support (IPS) team, who has provided possible solutions and assisted him in charting a course where he could reach his goals.

The IPS program is an evidence-based practice to help people with mental health struggles who want to work. The person supported through IPS is typically referred to the service during or after receiving therapy and expressing an interest in employment guidance.

Growing up, reality for McCoss, 35, wasn’t so bright and there seemed no hope for the future.

As a young teen, McCoss shared that he was physically abused which resulted in custody under Social Services and residing in group homes. He explained that during these years, anger management became difficult. After a hospitalization, he was diagnosed with bipolar disorder.

After being emancipated at the age of 16, a stable living arrangement was not in sight for McCoss who bounced between friend’s homes until he had nowhere to turn, subsequently becoming a homeless teen.

Throughout his teenage years, McCoss also struggled to maintain a healthy relationship with his father, although each tried to repair and smooth over their differences. In 2016 and working as a laborer, McCoss was living in a hotel. Although he would be paid at the end of each shift, consistent work was not available, which made it difficult for him to financially support himself.

One day on the job, he could not control his temper and was subsequently fired. Unable to afford his hotel room, he was homeless. During this time, a friend mentioned he might consider looking into Monarch to receive mental health assistance and other supports.

While receiving therapy services at Belllemeade, McCoss was introduced to Hinton.

McCoss remembered when the pair would initially meet: “I started explaining myself to her and we started formulating a plan on how to improve my job and communication skills. We were hitting a two-in-one from the start.”

Hinton outlined a plan to help him find housing and employment after their initial discussion. “I started trying to find him somewhere to stay, like a shelter, so that he could be job-ready,” Hinton said. “I started asking him about his natural supports. His father lived alone and in Thomasville. I ended up getting him to stay with his father for a short span of time”

Hinton said they worked together to build a resume outlining his skills and works experience  “We started preparing his resume and filling out employment applications,” Hinton said, adding that the preparation paid off after obtaining a job at a High Point manufacturer where he stayed for two years.

During this time, McCoss’s father would provide transportation to work. When the pair were at odds, McCoss would ride a bicycle from his father’s home in Thomasville to his job in High Point, an approximately a 40-minute ride. Hinton noted that McCoss was very determined to work and did everything possible to maintain employment.

No longer living with his father and eventually losing the manufacturing role, McCoss became homeless, this time, living on the streets in a tent. Hinton knew a stable living environment was key.

She found McCoss employment at Greensboro’s O’Neal Steel, but was concerned about his safety due to living on the streets. One night while McCoss was sleeping, he was robbed of a portion of his earnings. Because of the incident, he had difficulty sleeping. Being tired on the job in turn resulted in a safety mistake, costing him the job.

Hinton and McCoss returned to searching for employment, finding him a new role in late 2019. Today, he is employed as a forklift operator at Pactiv, a food-packaging products manufacturer. Hinton remarked that he has excelled at this job and will work even on his day off if his help is requested. As a result of hard work and dedication, McCoss has received a significant hourly pay increase.

He is now making enough money to support himself, his fiancé and child. The future is looking brighter.

Hinton checks in with McCoss weekly to make sure he continues to succeed, with their discussions focused on resolving any difficulties he might be having and ways to maintain his exemplary employment standing.

“Monarch has been a true, true blessing to me in all aspects of my life,” McCoss said. “I came from living in a tent to being engaged and in a house with a full-time job thanks to Monarch and Shantina. It was a blessing just waiting for me to find it. I am very happy with the success that has come from me learning to be independent with the help of Monarch.”