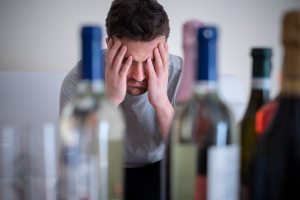 Before his parents passed away, Owen* lovingly cared for his ill mother and father. “It’s what a son should do,” he said stoically.

Today, over two years into recovery from substance use disorders and mental health issues, he has chosen to care for himself. Owen, 59, is grabbing and holding onto a life that he has been waiting years to live. He resides in an apartment of his own, holds a job, pays bills and has goals that he is taking purposeful steps to achieve.

Owen successfully attained sobriety at various stages throughout his life. The most recent was in 2017 when he went into treatment following his mother’s death because he was “sick and tired” of fighting substance use.

Owen’s relationship with drugs and alcohol initially began as a teenager and continued into his adult years. In addition to substance use disorder, Owen was diagnosed with schizophrenia and bipolar disorder.

To aid in his recovery, Owen is a member of Alcoholics Anonymous and Narcotics Anonymous. Owen said he wants to be “a contributing member of society.”

Behavioral Therapist Bill Garrot, LCSW, LPC, LCAS, based out of Greensboro Crisis Center in Guilford County, praised Owen for the steps he has taken toward sobriety, identifying situations that don’t support his recovery and choosing to avoid those circumstances.

Owen appreciates and realizes the lifesaving value of the therapy services he has received through Monarch. “ . . . Mr. Garrot is someone to talk to and talk over accomplishing goals. I get through a lot of things with Mr. Garrot, in addition to my meetings and sponsors,” Owen explained. He also thanked Nurse Practitioner Alemu Mengistu who assists with administering and monitoring prescribed medications.

Owen added that even in the midst of dealing with addiction, there is hope. “You want to have to stay clean and sober,” he noted, adding that he enjoys speaking about 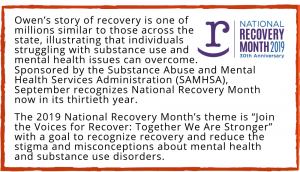 his recovery experiences at his church and support groups.

What advice does he offer to anyone wishing to take a stand against their addiction? “I know what I have been through . . . You can do anything you put your mind to,” Owen testified. “Help is available. Try to get involved with meetings, get a sponsor and into a program. It came down to a question with me, ‘Do I want to live or do I want to die?’”

For additional information about Monarch substance use disorder and mental health services available, call customer service at (866) 272-7826. Recovery resources and information can be found online at the following sites: Substance Abuse and Mental Health Services Administration (SAMHSA) and the National Institute on Drug Abuse (NIDA).

*Name throughout the story has been changed to protect the privacy of the person supported.