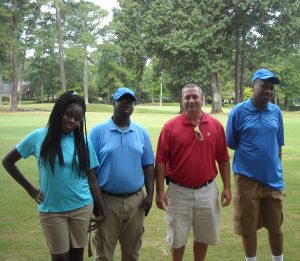 North Carolina is a golfer’s paradise with courses that make the state a popular attraction. Craven County’s New Bern Golf and Country Club is no different with its lush, pristine greens.

Bria Harris, 21, Terrill Jones, 24, Gerald Stallings, 22, and Lamonte Williams, 35, are employed year-round as part of the club’s maintenance team and are enjoying their roles that contribute to the course’s stellar reputation. Harris, Jones, Stallings and Williams participate in Monarch’s Health Drive Day Program.

Williams has been employed at the New Bern Golf and Country Club for the past seven years and has displayed an exemplary work ethic and proven to be a dependable employee. Recently, his fellow Health Drive day program attendees Harris, Jones and Stallings were hired to be part of the growing maintenance team.

Health Drive Community Team Leader April Judson explains that William’s employment principles displayed while on the job were a glowing testament for his fellow day program attendees when the club wanted to add to its maintenance team. “Lamonte possesses such good employment standing and a strong work ethic. They were interested in reaching out to us for additional staff,” explains Judson.

When New Bern Golf and Country Club Maintenance Supervisor Todd Holt asked Judson if any Health Drive day program attendees would also be interested, she knew who she could recommend.

When Harris, Jones and Stallings were initially approached about the job opportunity, the three expressed they were eager to work, as well as receive a paycheck. However, they also took the application process seriously. “They really wanted a job making money, so we worked with them to fill out the application, practice for the interview process and read company policies,” Judson says.

With successful interviews complete, Holt suggested the three do a trial work day on the course to make sure being part of the maintenance team was something they would enjoy. All three did and were hired.

Prior to becoming employed, Judson says the crew gained valuable training through their volunteer roles. “Each of them benefitted from experience volunteering for community groups. This helped greatly in becoming gainfully employed,” Judson explains. Even though they are employed, each continues their volunteer responsibilities.

Their job responsibilities include performing a variety of tasks on the golf course like cleaning up the natural landscaped areas by removing fallen branches, picking up pine cones and replacing divots.

Holt explains that the Health Drive crew is tackling tasks crucial to the efficiency of the course. “These are detail tasks that if not done, golfers take notice. They always do a great job and the highly visible work they do is extremely important,” Holt says.

Williams reports to the golf course every Thursday. Harris, Jones and Stallings, work every other Monday for right now, and are accompanied by a Monarch developmental specialist to assist them. As they continue to become acclimated to their new jobs, hours will be added, according to Holt.

“I enjoy picking up the pine cones,” states Harris, who gives her job two thumbs-up. Jones says picking up branches and limbs is his favorite part of being on the maintenance team. Williams and Stallings are fond of riding in the golf cart to get around the course.

“They take pride in their work and are an integral part of the maintenance team. They have really embraced their jobs and know what to do to be successful,” Holt explains.

With their earnings, Jones and Stallings bought their favorite foods, while Harris purchased shoes because she loves fashion. Williams shopped for a new pair of black shoes. “Not only does being employed teach them skills and independence, but the positive aspects of earning their own income,” adds Judson.

The Health Drive crew is treated like a valuable part of the maintenance team and included in staff functions such as appreciation lunches or special tournaments. “We have a really good work environment. They each mesh so well with all the personalities of the club team,” notes Holt.

Holt is so pleased with the Health Drive members of his maintenance team that he is an ambassador for inclusion. Whenever he can, Holt reaches out to New Bern area golf facilities testifying to the success of the Health Drive crew.

New Bern Golf and Country Club was awarded an Employer of the Year Award by The Arc of Craven County this past April for their inclusion efforts in employment. Holt dedicated the award to Williams, who attended the event.