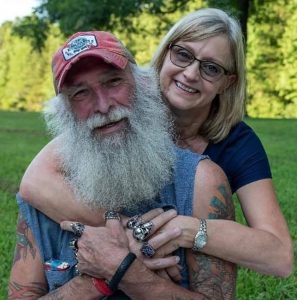 Lorie Tolbert-Byrd admitted that life is so much better, brighter even. Her smile serves as evidence in recent photos. She hears it in her laughter.

Now, life is good but it wasn’t always.

Tolbert-Byrd, 58, has fought her way through the haunting memories of rape, suicidal tendencies and other traumatic life events over the last several years. But her new husband and adult children can see, and are grateful for, the positive changes they notice in her.

Her strong connection with Behavioral Health Therapist Melissa Graves in Greensboro was key. Something just seemed to click and not only did a therapeutic relationship form but one of friendship as well. Tolbert-Byrd said it felt like old friends meeting and talking during sessions.

Their sessions, with the assistance of medication management from Nurse Practitioner Alemu Mengistu, have helped Tolbert-Byrd overcome diagnoses of post-traumatic stress disorder (PTSD) and bipolar disorder. “PTSD is much different than depression. You want to be better, but you don’t know what to do. Your mind thinks about what you should do but can’t do it on your own,” Tolbert-Byrd described her diagnosis.

June is designated as PTSD Awareness Month and while PTSD is most commonly associated with veterans of the armed forces, anyone who has ensured a trauma can experience PTSD. Survivors of sexual assault, serious accidents, natural disasters, or other traumatic events can find available treatments that help their quality of life.

An estimated 70 percent of adults in the United States have experienced a traumatic event at least once in their life and up to 20 percent of these people go on to develop PTSD, according to the Glance / Sidran Institute of Traumatic Stress Education and Advocacy.

Graves noticed how Tolbert-Byrd was extremely motivated and set goals for herself, as well as doing “homework” when not in session.

“She struggled with it a bit and felt like no one got her or listened to her,” Graves said of Tolbert-Byrd’s earlier attempts at therapy. “I always met her where she was so she could do the work that she needed to do . . . She wanted to be able to think clearly and feel emotions instead of falling apart. She wanted to accept herself.”

Tolbert-Byrd, born and raised in Greensboro, explained that she truly wanted to get better but didn’t know what to do until being guided during the one-on-one therapy sessions: “She [Graves] was so helpful and there was something about her demeanor that made me want to get better. She would just listen to me. It was nice to finally find someone to connect with and get better,” Tolbert-Byrd confided. “I did it for me. I never dreamt that I could be any different than what I was.”

For now, Tolbert-Byrd enjoys her time being a newlywed, her four grown children and six grandchildren and appreciating each day’s smallest details. She is pursuing photography. “They [Monarch] saved my life. They really did. I believe that with all my heart,” she said of the help she received at Monarch.

What advice does Tolbert-Byrd offer to someone afraid to reach out for mental health help? “Don’t waste any time. There is nothing wrong with getting help. My family has seen a change in me. My daughter is getting counseling because they see how much better their mom is doing. . . Don’t wait to get help and work through it. If I had to do it all over again, I would have done it much sooner. I could have lost my life.”

Photo caption: Above at right, Lorie Tolbert-Byrd, poses with her husband, Jerry.