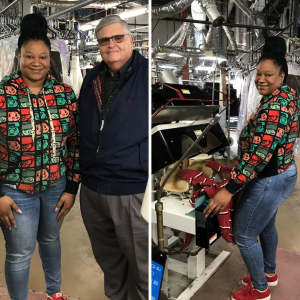 Latoya Parker had been searching for a job for quite some time with the journey resulting in dead ends. Finally, her professional luck took a turn for the better when she was extended an offer of employment in August.

The experience taught Parker a powerful lesson about herself. An inner perseverance was pushing her forward. She wasn’t willing to give up.

“I realized that if I want something, I won’t give up until I get it,” Parker declares. She was assisted in her job search efforts by the Individual Placement and Support (IPS) team in Nash County after being referred while seeking Monarch’s behavioral health services to treat her depression.

IPS is an evidence-based practice to help people we support with mental health struggles who want to work. Paired with Employment Support Specialist Don Winslow, a member of the Rocky Mount and Wilson IPS teams, the two worked together to help Parker reach her goals.

Upon first meeting Parker, Winslow realized she felt defeated in being unable to secure employment. At the same time, he could see how motivated she was: “I think Latoya was starting to think that getting a job was a long shot at best. She hadn’t given up finding a job, but I think rejection had worn down her self-confidence.”

Parker, 34, is proud that she currently holds a 30-hour-a-week job as a press operator at Westwood Village Cleaners in Wilson. “I was excited when I heard I got the job. It is something to occupy my time and a source of income,” she says.

Winslow, who personally knew the Wilson business owner, overheard his discussion of hiring needs while patronizing the business. Winslow told him he had the perfect candidate. Securing an interview for Parker, the two worked on her interview skills with mock question-and-answer sessions and how to emphasize her professional strengths.

“A foundation of trust was built between us. I believed in her and she believed in me,” Winslow remembers after their initial meetings. “I think she felt with me behind her, she could accomplish a lot.”

Parker said she appreciated Winslow’s knowledge and guidance. “It felt great to have someone else in my corner. I felt more confident with Don supporting me,” Parker says, adding that she also has the support of her family with whom she lives.

Winslow is a firm believer that most of the people he assists possess the motivation. “People who have mental health struggles or setbacks don’t have to think that life is passing them by,” Winslow recommends. “If the person is determined and will pick themselves up and move forward, they can accomplish a lot.”

Winslow’s experience spanning 36 years in the vocational rehabilitation field has offered valuable insight about employment assistance for those with mental health struggles. “A rough time doesn’t mean it’s the end. Everyone has talent and skills, and they need to realize that they have a potential to shoot for,” adds Winslow. “They need to believe in themselves . . . those goals can be achieved.”

The pair have agreed to stay in touch even though Parker is doing well and will be discharged from the program in the near future. “She is always giving it her best shot and her best effort every day. Her employer is very pleased with her work ethic,” Winslow says.