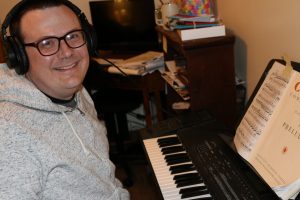 Spencer Home resident Mark Tomasik’s affinity for music became evident when he was a toddler. He wrote the correct musical notes on the keys of a toy piano to help him learn to play.

While growing up, his family fostered his budding talent. A musician was born.

Tomasik, 41, brings melodious sounds to Monarch’s Spencer Home located in New Bern, a Group Moderate Living home focusing on the mental health needs of its residents. In his room, near the window, he has an electric piano that he plays.

At 4 years of age, he mastered the violin. He studied the piano at 6 years old and moved on to the organ at the age of 9. “As soon as my feet could reach the organ pedals, I was playing,” he said.

While growing up in Whitesboro, New York, a local pastor was impressed by Tomasik’s musical talent, so much so, he paid for his organ lessons through his teenage years in exchange for him playing the organ and conducting the choir at the church. He obliged and continue to perfect his musical talents.

In 1995, his family moved to North Carolina, making their new home in Cherry Point. After graduating from high school, Tomasik applied, auditioned and was accepted into the Appalachian State University’s Mariam Cannon Hayes School of Music on a full scholarship.

As a young adult, Tomasik suffered a traumatic brain injury following a fall and hitting his head. As a result of the accident, he experiences short-term memory loss. In addition, he was diagnosed as having bipolar disorder.

During the summer of 2018, Tomasik became a resident of Spencer Home. Tomasik continues to improve on his musical skills by practicing once a week using New Bern’s St. Paul’s church organ. He also began giving organ recitals at the church.

“It is my therapy and my life. It is hard work playing,” he said of his passion, confiding that singing and playing the organ are his favorites. “I have to focus when I play the organ. It calms my mind. It helps me focus on one thing at a time and take things a little bit slower.”

He strives to perfect his talents through practicing and studying music: “I try to challenge myself. That is the only way to continue to make myself better. I want to get better.”

Why is music special to Tomasik? “Music makes me feel like I am worth something and I am on top of the world when I am playing,” he said, adding that standing ovations from his audiences are the best.

Tomasik has had several pieces of his musical arrangements published, in addition to musical theses.

Residential Manager Carolyn Boggan said Tomasik has adapted well to the group. He enjoys the routine of household tasks, attending a local day program during the week and outings with his house mates.

Staff and house mates appreciate Tomasik’s sunny disposition. “Every day is good day. I like to say I am in a permanently good mood,” he said with a laugh.