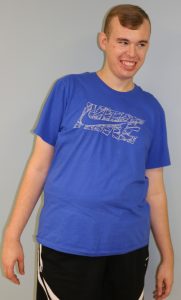 Tanner Frogley, a Health Drive day program attendee for over two years, has made impressive strides in gaining self-confidence and learning how to better advocate for himself.

Frogley, 23, volunteers with Meals on Wheels and at the Tryon Palace historical site in New Bern. He also has taken an active role in interviewing potential new staff candidates at Health Drive.

Frogley is best known for his engaging smile and friendly demeanor. He enjoys enthusiastically shaking visitor’s hands, or anyone he doesn’t know, to introduce himself.

Frogley, with his naturally social nature, has become an active participant during interviews with day program candidates. “One day Tanner came in, sat down and joined me in an interview,” Judson remembered with a laugh.

Judson said Frogley’s presence during an interview is appreciated and helpful to the Health Drive staff in seeing how candidates respond to his questions, requests and presence. “I call it the Tanner test. I see how possible candidates respond to Tanner as a litmus test during the interview,” Judson said. “He is very direct and will tell you what he needs in his own way.”

During the past two years, Frogley has grown in a variety of areas. “Two years ago, he could not sit through meetings. He has come a long way,” Judson said proudly of his assistance in hiring and interests in growing his community volunteer roles.

Frogley volunteers with Meals on Wheels enjoying the social aspect of his role. He was interested in adding another service opportunity to his schedule. “We all thought of his strengths. We looked at his skills from Meals on Wheels and thought what would Tanner be good at?” said Judson.

Frogley applied and was interviewed for a volunteer role at Tryon Palace. His efforts paid off with an invitation to be a greeter at the historical site. “I work at the Tryon Palace,” Frogley stated. “I like shaking people’s hands at Tryon Palace. Everyone says hi back.”

Tryon Palace, a popular North Carolina venue, was the administrative headquarters of the British governors in the late 1700s and known as the Governor’s Palace. Today’s visitors tour a replica of the original structure that burned.

Judson and the Health Drive staff knew Frogley’s strengths would assist him in reaching whatever goals he established for himself. “He is super friendly. He loves people,” she said with a smile.

*Due to the September 2018 hurricanes and the New Bern area receiving severe flooding, the history center area of Tryon Palace has been closed to tourists. Frogley has been volunteering at a local church for the time being but hopes to return.