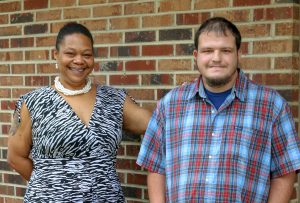 Group home resident Stephen Peek has spent the last year traveling on a path of self–improvement. His housemates and Monarch support staff are witness to how this metamorphosis has changed his life for the better.

Peek is a resident of Fourteenth Street group home in Bessemer City, a supervised living residence for those with intellectual and developmental disabilities.

Peek, 28, wasn’t complying with his established, personal goals. Some behaviors included refusing to socialize with his housemates and lack of personal hygiene. Residential Manager Regina Love said about one year ago, staff explained ways in which he could make proactive changes to his life.

Fast forward to today, and Peek is a changed man.

He mentors his housemates, cooks meals for himself using the stove and has earned himself the nickname, “Mr. Handsome.” Today, his smile is bright, and he looks forward to working at his job and enjoying outings with his housemates.

Peek confided that he found the will to change because he valued where he called home. He realized that the staff’s suggestions were coming from one of concern for his well-being. “Stephen did some soul searching and we started seeing small steps which turned into giant leaps,” Love said.

Physical changes have brought about a change in Peek’s attitude as well. “Along with the outward changes has come self-confidence. Stephen takes pride in his appearance when goes out in the community,” Love noted.

Peek recognized Behavioral Specialists Octavia Childers, Ethel Bridges and Darlene Rhodes for their assistance and guidance. “We all cheered him on and supported him as he made changes. Some of the staff chipped in their own money to purchase clothing and shoes to help him with his confidence,” Love said.

“It makes me feel good to have this support,” Peek said.

He is now employed and proud of his job at Believe in Abilities, where he creates artwork and helps with cleaning duties. Peek was asked to serve on their Human Rights Committee, where employees represent the voice of individuals supported. His colleagues are also helping him practice skills needed for future job searches such as interviewing and filling out applications.

Love unabashedly describes herself as a protective “mama bear” and is overjoyed at the successes of residents. “It gives me a sense of joy and reminds us why we come to work each day . . . Our staff never gave up hope of Stephen finding what he wanted to do. I am proud of the staff for supporting him and cheering him on. They do it because they truly care for him,” she explained.

Peek’s future goals include securing residency in a supervised living apartment so that he can be more independent and have the freedom to care for himself and entertain friends.

“Stephen has made major life altering changes and is destined to be great. We are just so proud of him,” Love said.