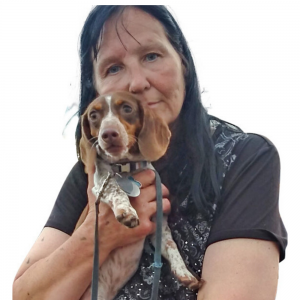 ​After spending most of her lifetime struggling with substance use, Cheryl Dunlap realized that was not the answer to life’s problems.

Today, with the help of Greensboro Behavioral Health Therapist Bill Garrot, MA, LPC, LCSW, LCAS, she works to overcome her substance use and mental health struggles to keep her life on track. Garrot, who has counseled Dunlap for almost two years, explained her diagnosis as multi-pronged: depression, post-traumatic stress disorder and alcohol dependency in sustained remission.

Dunlap has worked diligently to manage her symptoms and has re-connected with her family, secured a home of her own and set employment goals, all while maintaining her sobriety. For the past five years, she lacked a permanent residence, most often staying in hotels. In October, she received confirmation that she would be moving to housing she could call her own: “I am alone, but I am not lonely. I am happy and excited to get a new home.”

In addition, Dunlap, 51, has re-established relations with her two daughters with whom she had been estranged, and is happy again. Contributing to that cheerful demeanor is her service dog, a 2-year-old Dachshund named Rascal. “They are inseparable,” Garrot said of the pair. Dunlap admitted her constant canine companion is “everything” to her.

Therapy has been key, Dunlap will readily admit. She praised Garrot for bringing a “healthy perspective” to the way she looks at life. “He knows what needs to be said to bring me back. He has given me more peace than anyone. He has changed my life,” she said of Garrot’s guidance.

Growing up, Dunlap’s life journey took her across several states, residing with extended family and friends while watching family members battle alcohol addiction. She had her first taste of beer at age 13.

Traumatic life experiences included losing custody of her daughters; her mother’s suicide when Dunlap was 25 years old; and stays in homeless shelters, where she attended community rehabilitation programs working to get her life in order.

“I didn’t want to drink. There is a switch inside of me that goes on and off,” she said of her issues with substance use disorder.

“My drinking has cost me everything over and over. . . It is what cost me my peace of mind . . . living on the streets, being outside, it is so much work to put this back together,” Dunlap shared about being homeless combined with her mental health and addiction diagnoses.

What would Dunlap advise someone else who is struggling with similar issues? “Once you make a decision to become clean and sober, join a program to learn how to deal and interact with people who have been where you are,” she advised, adding that the addiction needs to be treated for success in life. “Once you are determined to break free from addiction, the world will rally around you.”

For individuals struggling with mental health or substance use disorders, Dunlap recommended seeking therapy and services like the ones available through Monarch: “Counseling has been beyond priceless in straightening out my perspectives in major areas of my life that I couldn’t shake out or come to terms with.”

Since Dunlap has now secured permanent housing, she promised herself she would return to work in the paralegal field. She had previously earned both her bachelor’s and associate degrees. Currently, she depends on the generosity of others through panhandling in the Greensboro area.