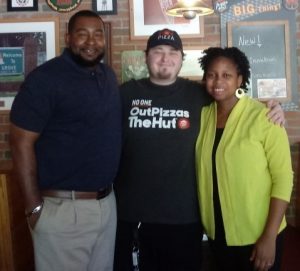 Lloyd Jones’ beams confidence, motivation and a desire to learn. Securing a position at the Pizza Hut in China Grove has instilled a new-found conviction in the 26-year-old.

The pair enjoys contrasting what Jones was like upon first meeting him last spring and how far he has come today. Jones had been actively seeking employment for over two years with no job prospects. His self-confidence was waning.

With Berry and Moore on his side, Jones’ job search took a new direction. “When I got to Tina, she was really motivational and she was kind of a get-up-and-go person. She pushed me to better myself,” Jones remembers.

Jones estimates that he has received Monarch services since he was 11 years old with the most recent assistance from the IPS team. IPS helps people we support in search of work while in recovery from a mental health or substance abuse use disorder.

When matched, the trio hit the ground running, reviewing how to submit a job application, crafting a resume, practicing interview scenarios and emphasizing the importance of personal follow up with potential employers. Moore and Berry helped Jones accomplish small goals which eventually added up to a win. In August he was hired at the Pizza Hut location near his home.

“When I first met Lloyd, I could tell he wanted to do something with his life but he just didn’t know how to get there,” Moore explains. “We discussed what he wanted to do and how he could achieve it.”

Moore knew that Jones loved to read so she incorporated visiting the local public library with his job search, applying for a library card and checking out books: “Every time I saw Lloyd, I wanted to challenge him. I would ask him, ‘Today, what is the plan?’”

Success didn’t happen without some rejections – and some that hit hard. Moore explains that they helped Jones learn and grow even from the dismissals. “If you genuinely want something and you don’t get it, it probably wasn’t good for you. That is what I took away from not getting a job I applied and interviewed for,” Jones says.

Not only did Jones find a job at which he enjoys working but new friendships with staff and management. “I love my job because of two reasons. One, I get to work with food and two, the kind of friendships between the people at work. Work is fun because we tease each other,” Jones says, noting his tasks include making pizza and wings, cleaning and washing dishes.

With their banter reminiscent of close friends, Jones confides that the best part of his week is when he meets with Moore and Berry. “One thing about Lloyd is that he pretty much pushes himself and does what he needs to do. He is easy to work with and has the natural support of his family,” Berry says. “I tried to build that rapport and support them anyway I can. It means a lot to me to see them get better, be successful and build friendships.”

IPS support doesn’t end with job placement. Moore notes that continued contact is critical to both the person supported and employer. “We don’t compromise. We go out and see those we support on the job. During the first 30 days of their new role, it is my duty to contact their manager,” explains Moore. “I let their manager know that I am here to help.”

Moore and Berry both agree the best part of their job is seeing their person supported ultimately succeed – like Jones. “At the end of the day I want to see him happy and successful . . . The teamwork doesn’t end,” Moore says. ​

As Jones’ confidence grows, the horizon is looking even brighter as he pursues earning his GED. He is enrolled and taking classes at the northern campus of Rowan Cabarrus Community College, and would like to get his driver’s license and eventually purchase a car.