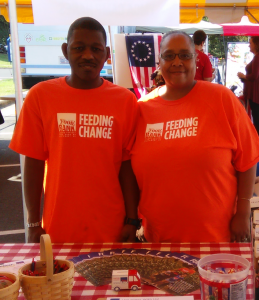 Wednesdays are a special day for Warren Kelly and Developmental Specialist Gwen Blane from Monarch’s CHOICES at the Ridge day program. For the last four years, the duo heads over to Second Harvest Food Bank of Northwest NC (SHFB) at least once a week to serve an unprecedented need.

According to SHFB, 17 percent of the northwest region in North Carolina is food insecure – meaning that more than 300,000 people lack the reliable access to a sufficient quantity of affordable, nutritious food. Kelly and Blane are two of hundreds of volunteers hoping to improve the lives of those families by organizing and preparing more than 22 million meals for residents each year.

“Volunteering with Warren is such a treat because everyone gets to see what I see. He is a social butterfly and even though he is deaf, he is always engaged and ready to take it up a notch,” says Blane.

Kelly began volunteering for Second Harvest Food Bank in 2013 and continued to attend with Blane in 2014.

“Volunteering is his hobby and helping the community is his goal,” adds Blane.

Learning about the growing demand and need for nutritious food in their community has motivated both Kelly and Blane to get involved with the food bank more than once a week.

“It wasn’t until I started volunteering with Warren and the food bank that I learned about food insecurity and really noticing the food pantry locations on every corner. That is why we always commit to do as much as we can for the food bank whenever they call on us – office work, sorting food, attending and assisting with events – you name it,” says Blane.

Kelly’s revelation about how dire the need was for food was when he helped on the food bank’s backpack project, delivering backpacks to children at the start of the school year filled with food as well as supplies.

“There are so many children in our community who are hungry and we are doing what we can with what we have to change that,” says Blane.

In the nomination form, DeCicco cites, “Warren and Gwen are a very special team at Second Harvest Food Bank and we live better by just knowing them. They breathe life into those who need strength to keep going and power on.”

“The Second Harvest Food Bank has allowed Warren to establish amazing relationships and they always make him feel appreciated and special. They recognize him for his birthday and Christmas, they have gifted our day program a Keurig coffee machine, and they have even sponsored him to attend the self-advocate conference hosted by the Arc of NC, too.”