Ted Patterson, a resident of Circle Drive Group Home in Mount Pleasant, takes being diagnosed with Prader-Willi syndrome in stride. He doesn’t let a medical diagnosis get in the way of enjoying life.

Hiking with his direct support professional, weekend activities with his mom and fiancé and excelling at his five-day-a-week job at Jim ‘N Nick’s Bar-B-Q restaurant in Concord are just a few things that keep his calendar filled.

Patterson was diagnosed as a child with Prader-Willi syndrome, defined as a genetic multisystem disorder. In infants that can mean diminished muscle tone and difficulty feeding. In adolescents and adults, it can cause excessive, insatiable appetite. Without attention and supervision, individuals can overeat which in turn can result in obesity and diabetes.

The National Organization for Rare Disorders states that Prader-Willi syndrome occurs in one out of every 15,000 births with males and females affected equally occurring across all races and ethnicities.

Monarch’s Circle Drive group home and Lafayette Home in Albemarle are the only two multi-bed residences in North Carolina dedicated to caring for people diagnosed with Prader-Willi syndrome. Circle Drive Residential Team Leader Shanita Jackson said there is a waiting list of applicants wishing to receive services through the residences.

In 2017, Patterson, 30, moved into Circle Drive after living with his father in Durham for one year. Prior to that he had lived on his own for four years, had attended Alamance Community College, where he studied small animal care courses, and previously worked as a kennel technician at a local veterinary clinic.

Patterson’s parents, Mary Jones and Ted Patterson, Sr., were integral in helping him become accustomed to living with Prader-Willi. Jones said she always tried to empower her son to try any activities he wanted as he was growing up. He participated in sailing, swimming, Special Olympics and Boy Scouts.

Jones is proud of her oldest child’s accomplishments. “It is great to see him doing so well and that gives me, as a parent, a sense of security,” she said. “He never ceases to amaze me. He is such a positive, confident person . . . Life is full of taking chances and I support him in his endeavors. I am thankful he is receiving the services he needs now.”

Sticking to a routine, watching his diet and keeping active are important to Patterson’s healthy lifestyle. Following a recent shift at his job and sporting a black baseball cap with the restaurant’s name stitched across the front, Patterson talked about his job, and what success means to him.

Patterson said he enjoys the comradery at work and the confidence he feels when he contributes during a shift. Of course, he also appreciates receiving a paycheck and tips, he said with a laugh: “What I like about my job is that I feel like I am able to do my job. Jim ‘N Nick’s is always appreciative of my work and tells me I am doing a good job. All the servers are really nice and do the same thing.”

When starting the job in 2018, Patterson initially completed any task asked of him like mopping floors and cleaning the dining room. Today, Patterson has progressed to wearing many hats. He is a server assistant, handles and prepares to-go orders and works late during the Saturday evening shift. Saturdays are the busiest day of the week in the restaurant business. His future goals include moving up the employment ladder at the restaurant chain.

After moving into Circle Drive with Monarch supports, Patterson lost about 100 pounds through proper nutrition and exercise. He admits that he has put a bit of weight back on but with the staff’s help is renewing his focus on diet, maintaining the weight loss and prioritizing exercise.

Patterson, his own legal guardian, said long-term goals include getting married one day and a return to living independently on his own. 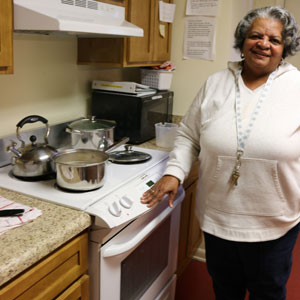 It’s dinner time on a spring evening at Circle Drive Group Home in Cabarrus County. The ranch-style home is filled with the fragrant aroma of pork chops roasting with onions and gravy. String beans are cooking on the stove. A tossed salad and fruit cup will round out the evening meal.

Residents can be heard talking about their day, as some returned from jobs and others waited patiently for dinner.

Monarch Developmental Specialist Residential Annette Ross is bustling about the group home’s kitchen preparing dinner for the six residents who live with Prader-Willi syndrome. Her cheery, maternal demeanor brings a light-hearted spirit to the residence.

“I have been cooking all my life. I really enjoy this part of my job,” she noted, checking pots on the stove while she chats.

With food the focus in many of today’s environments, navigating life with Prader-Willi syndrome might seem like an overwhelming obstacle. The Monarch staff at Circle Drive Group Home concentrate on supervision and structure and it has proven to help people supported thrive. A certified dietitian visits regularly to assist residents in carefully planning meals. The dietitian considers their tastes and preferences and helps them understand the healthy eating that aligns with their Prader-Willi diagnosis.

Ross understands the dietary restrictions of living with Prader-Willi, carefully consulting a large, three-ring binder kept in the kitchen in which the dietitian outlines daily caloric intake for each resident.

Outside of mealtime, Ross tries to take the focus off food by coordinating hands-on activities such as sewing, crafting, gardening and artwork, such as making jewelry, to keep the residents, who range in age from 30- to 70-years-old, busy. The staff and residents decorate the home according to holidays.

“We are here to let them know they are special in another kind of way because they live for food,” Ross explained, adding that each resident has a “Me Day” when they get to do whatever they want.