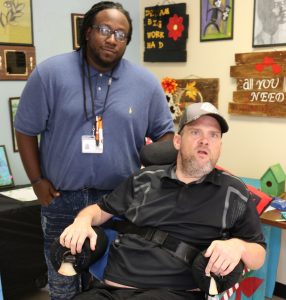 Kevin Powell’s blue eyes light up when he talks about his passion for Carolina sports.

From local to national teams, Powell is a true sports enthusiast sharing statistics and player data like an experienced announcer. His wheelchair is proudly decorated in the distinctive Carolina Panthers colors of black and royal blue.

A long-time attendee of Columbus Industries located in Whiteville, Powell, 41, has participated in the day program for over 15 years.

Recently, Powell enjoyed being actively involved in the interview process for his new direct support professional (DSP). Powell knew what he was looking for in a one-on-one, support person.

A number of candidates were interviewed for the role. However, not surprisingly, sports turned out to be the common bond.

Community Engagement Team Leader Susie Nathan saw something that “just clicked” when Powell met with Charles Colvin for the initial interview to be considered for the vocational developmental specialist role. “Kevin was excited Charles had the same interests and both were Carolina Panther fans,” she says.

Powell admits that he was searching for one attribute in a DSP: “I really wanted a good person.”

Until Colvin was selected as Powell’s regular DSP, staff such as Vickie Powell-Cross, a development specialist vocational-instructor, filled in. Powell struggled with the adjustments in staffing, which sometimes affected his mood. But since being paired with Colvin and taking an active interest in a variety of art techniques at 1019 The Making Place, located down the road from Columbus Industries, staff has seen a positive transformation in Powell.

“We have seen a great change in him because he is doing what he wants to do,” Powell-Cross states, noting they affectionately call him “KP.” “He is still Kevin and sweet, but he looks forward to attending the day program and 1019 Making Place.”

Powell-Cross agrees with Nathan that Powell and Colvin are a good fit and “work well together.”

Colvin says he enjoys his time with Powell and looks forward to their post-weekend sports recaps. “My job is fun,” Colvin says. “We have a common interest in football so talking on Mondays after the weekend games is always something we do.”

His mom, Sheila Powell, is thrilled with his progress and outlook. “Kevin has really good people in his life,” she says with gratitude. “He comes home and is excited to talk with us about what he has done during the day.”

Sheila believes his participation in the art activities and the addition of Colvin have sparked a motivated demeanor in her son: “We have seen changes in the day program activities with Susie Nathan’s lead. Kevin has been exploring art and other activities. He very much enjoys attending the Columbus day program.”

Sadly, there was a time, Sheila admits, that physicians didn’t paint a bright future for her son and limited his time due to his cerebral palsy and muscle atrophy diagnoses. “He has proven them wrong. He has outlived what they predicted,” she shares with a smile.

Nathan isn’t surprised that Powell has set and is reaching his goals: “I think he has surprised himself of what he is capable of doing.”