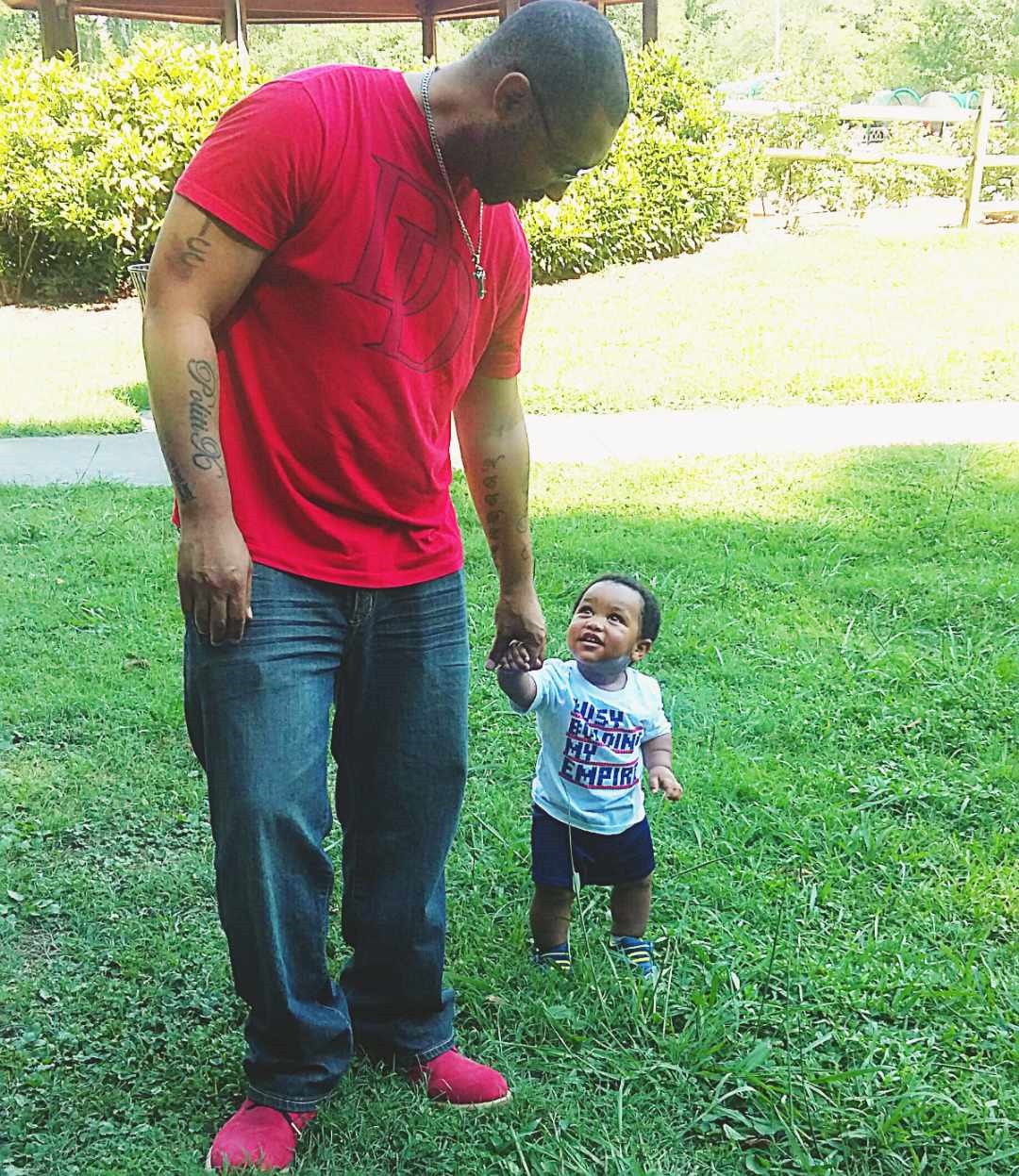 Michael Williams, a person supported through the Individual Placement and Support (IPS) team in Nash County, takes the hand of his young son, Mikey.

Michael Williams likes to look forward, search for opportunities that lay in front of him and determine how those options could help him provide the best life for his four-year-old son.

Employment Support Professional Donald Winslow, who is part of the Nash County IPS team and a 40-year job development professional, helped Williams chart a plan to reach his professional goals.

Mental health diagnoses can create roadblocks for individuals searching for employment and finding a way to support themselves and their family, Winslow explained. That is where Monarch’s IPS teams step in. IPS teams across the state work in collaboration with behavioral health professionals to provide a team approach in assisting individuals in need to achieve personal and professional goals.

Williams, 39, said he feels that sometimes his mental health diagnoses make it difficult to envision success. He reminds himself to be aware of behaviors that trigger self-doubt. Williams shared that he was involved in difficult situations while residing in New York and prior to moving to North Carolina to be near family, which ultimately resulted in a PTSD diagnosis.

He shared that today, as a way to deal with PTSD, he incorporates coping skills when necessary and reminds himself of the importance of raising his son, of whom he has full custody. “He lives with me and everything that I do is for him, he is my motivation,” the committed father remarked.

With his mental health diagnoses in check and undergoing therapy, he moved on to reaching his employment goals. With a strong resume in place and interview skills perfected from past work experience, Winslow guided and supported Williams through the job application process as well as networking. Williams wanted to return to a role within the banking, financial or business sector where he had worked for over 10 years.

Throughout the job search, Williams explained that Winslow kept in contact with him touching base to see how interviews went, introducing him to contacts within the community and writing letters of recommendation for him.

Williams landed an interview and ultimately secured a customer contact specialist role at Carter Bank & Trust in Wilson in November 2020. The position was in a call center role but he knew the offer was a step in the right direction, a foot in the door of a reputable company and one in which with his skills, experience and confidence he could excel. 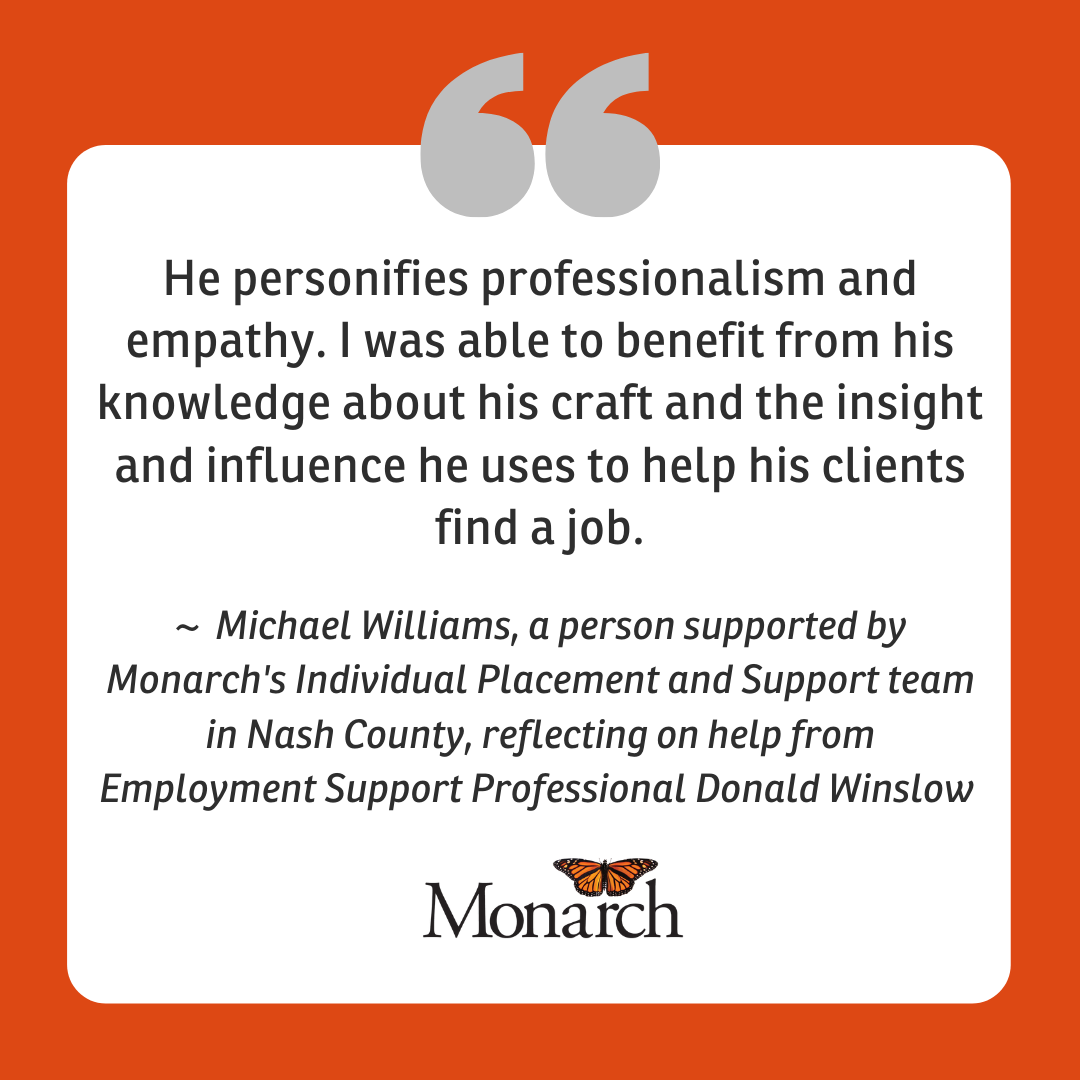 And, excel he did. Within three months, Williams was promoted to loan specialist within the company. He was told the reason he was promoted was in part because of the way he went above and beyond in assisting a customer who inquired about loan and escrow information. “I have learned over the years to go the extra mile for customers,” Williams said. His managers urged him to apply for the open loan specialist role, which was a promotion.

Winslow, who has worked in vocational rehabilitation for over 37 years and with Monarch for three years, believed Williams would ultimately achieve his goals but he has also seen other changes in him. “I think his confidence has always been good but now he seems to be a happier person. Going to work has made him a happier person and motivated him to move on to reaching other goals that he wants to set for himself,” he observed.

Williams is grateful for the opportunity to collaborate with Winslow. “He personifies professionalism and empathy. I was able to benefit from his knowledge about his craft and the insight and influence he uses to help his clients find a job,” he said. “I am in a good space mentally and confidence wise. Don helped me with that. I already had that in me but he helped me cultivate that.”

Williams firmly believes that Winslow’s support and mentorship strengthened a belief within himself: “He really cared and not just about the job but about me. That makes a world of difference when someone not only cares about their job but the people they are working with and that shows. You can feel it and you get confidence in yourself, and that is what led me to be successful.”

Being diagnosed isn’t the end of the journey, Williams said, admitting that he still feels alone sometimes and will take time to pause, reflecting on his accomplishments. He hopes sharing his experience will help others. “I have to take into account and sit back and see what I have achieved. There are those times when I say, ‘I am OK.’ Everybody’s experience is different and stress comes in different forms,” he said.