Direct Support Professionals Are the Heart of Monarch Services 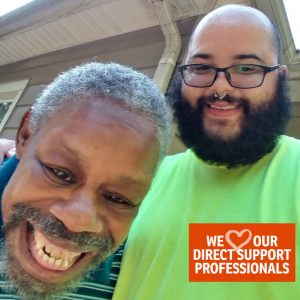 Tony McKinney, a Mainstream Home resident in Asheboro, lights up a room with his ear-to-ear smile and infectious personality.

Larry Butler, McKinney’s direct support professional (DSP), feels the people Monarch supports are the primary reason he enjoys his role as caregiver: “By far my favorite part of being a DSP for Monarch is the guys I get to work with.”

Monarch joins a nationwide celebration honoring the men and women who selflessly provide compassionate care for the people we support during Direct Support Professionals Week each September. A DSP’s main role is to help people including those with intellectual and developmental disabilities (I/DD) lead self-directed lives, provide assistance with daily living activities and serve to encourage community inclusion. In less formal terms, Monarch DSPs are the shoulder to lean on, the dependable, guiding hand or the supportive words of advice.

“What an honor it is for Monarch’s board of directors and leadership to recognize you during this special week. We are so pleased to have such compassionate and dedicated staff,” says Jim Kelley, executive vice president and chief operating officer, long-term services and support. “Your work is not only recognized by us, but it is also noted by international accrediting organizations like the Joint Commission and the Council on Quality Leadership. The results of their audits and the parent surveys have been simply outstanding. We appreciate what you do so much.”

Monarch currently employs over 800 DSPs across North Carolina, making up a significant sector of the organization’s total 1,800+ employees. The American Association of Intellectual and Developmental Disabilities estimates that by 2022, more than one million new DSPs will be necessary across the country to support those needing services.

What does it mean?

“Being a DSP can mean a lot of things to different people,” says Butler, adding that the way society perceived those with I/DD when he attended school was very isolating with segregated classes and lunch arrangements. “Nervous couldn’t even begin to explain how I felt showing up to work for the first time. Even though management explains what you are responsible for, you don’t really know what to expect until you get on the floor.”

Being a DSP is different than other jobs, Butler declares. “The people we support rely heavily on staff in all sorts of ways,” says Butler. “If you show up five minutes late for a factory job, you’re probably still going to make your quota for the day. If you show up late at your group home, everything is thrown off. You could be late running route, which makes you late for giving someone a shower, which could make you late for giving afternoon meds.”

“The people we support depend on us to be on time for work, so they can be on time for their day program, job or volunteer work. A machine isn’t waiting for you here, people are,” says Butler. “At the end of the day, you may be the only person these individuals feel like they can connect to or can depend on.”

Heritage Club’s DSP Felicia Patrick defines her role as helping the person supported reach life goals and experiencing their journey with them.

Patrick has supported Christie Cooper for the past four months and is pleased to witness her improvements. “Christie is not just someone I support at work. It’s not just a job to me. I love what I do, and I genuinely love and care for the people I support,” notes Patrick, who has worked in the DSP field for five years.

Patrick knows well the important role that caring DSPs play because her son, who has cerebral palsy and is autistic, has benefitted from similar services. “The best part about my job is that I get to work with Christie and the other individuals at Heritage. I love seeing their growth and improvement,” she adds.

DSPs often share in the excitement of the successes of the people supported. Carmel Forest Drive Home DSP Michelle Scales, who has worked as a DSP for 14 years, was thrilled when Brent Powell, her person supported, was extended a job opportunity in Charlotte. “It was exciting to watch him fill out applications, make phone calls and speak to managers about being a part of their team when we were out in the community,” Scales explains.

Powell, who has been employed for the past eight months, is currently pursuing computer classes to enhance his skills, preparing for a promotion or additional employment opportunities, as well as working toward living independently. “My favorite part of being a DSP is assisting an individual with a disability to lead a self-directed life and become productive in the community,” Scales adds.

The people we support oftentimes think of their DSPs as family. Cohen House DSP Rodney Barrino, who has worked in the field for 13 years, remembers an instance when he was sick forcing him to miss work. Josh Walker, his person supported, was concerned. “I got really sick and Josh and his mom called to check on me,” Barrino recalls.

“One afternoon I was sitting next to the trampoline and she was sitting alone playing with her toys. Esther threw a ball and it rolled towards me. I rolled it back and she rolled to me again,”Stroman explains. “I praised her for rolling the ball, taking turns and playing. She gave a little smile and then scooted toward me. Once she got close to me, she put her hands in the air for me to pick her up . . . Getting on the trampoline, I held her hands and she jumped and bounced. She laughed so hard and so loud. I was amazed because for a few minutes she was engaged, using eye contact and smiling. I was amazed.”

The role is a gift and the bond is “unbreakable”

DSP Deve Napper of CHOICES at the Ridge in Winston-Salem views her role as a gift and describes her bond with George Chamis as “unbreakable.” She has supported Chamis as his DSP for the past two years.

“Being a DSP is one of the greatest gifts I can possess because this gift wasn’t given to just anyone,” says Napper. “I look for the teachable moments. Right now, George and I are working on sticking up for ourselves and advocating for what we need.”

And sometimes, it is the person supported that is unknowingly providing that support. Napper explained that the passing of her mother was very difficult for her: “George definitely helped me get through that period of my life. You just can’t have a bad day around him.”

Not only do the DSPs see growth in the people supported, but their experiences allow for their own personal and professional growth as well.

“I got into this line of work expecting to help individuals grow, but I ended up growing with them. To me, this has been by far the most impactful job I’ve ever had,” Butler says of his DSP experience.

Monarch22 hours ago
"I love to see the people that we serve receive the help and services that they need. It is rewarding to see the progress that they make while with under our care and being able to see our services working.” Want to #LoveWhatYouDo, too? We're #Hiring! Visit: http://ow.ly/Y5NJ50Hp3pR #Jobs #Recruiting #MentalHealth #MentalHealthAwareness

Monarch3 days ago
Weather Update: We have behavioral health locations that will be closed or operate under a delayed opening schedule on Tuesday, January 18 due to inclement weather or staffing conditions.

Monarch3 days ago
At the heart of our mission is #Helping others. Our staff across #NorthCarolina strives each day to provide excellent care for adults and children with #MentalIllness, intellectual and developmental disabilities and substance use disorders, help them overcome obstacles and reach their goals. To honor the #MLK legacy, consider ways to help others in your life. #MartinLutherKing #IHaveADream #Love #MartinLutherKingJrDay #MLKJr #Freedom

Monarch6 days ago
Please note that our behavioral health outpatient clinics, day programs and offices across #NorthCarolina will be closed on Monday, January 17 to honor Dr. Martin Luther King, Jr., Day. We will resume regular business hours on Tuesday, January 18. For details about our services please visit, www.MonarchNC.org. Thank you! #MLKDay