Bird’s-Eye View: Afternoon in the Life of a Direct Support Professional

Monarch Marketing team’s Communications Manager Melissa Tanferno, pictured at right, spent an afternoon with Residential Developmental Specialist Joanna Watson, right, to highlight the important role they play in the lives of the people we support diagnosed with mental illness and intellectual and developmental disabilities. The story that follows is her bird’s-eye observations.

On a Friday in July, I was excited to spend the day with Joanna to catch a glimpse of what she does. As a member of Monarch’s Marketing team, one of my favorite parts of my job is to travel to our sites and meet with staff like Joanna. I learn the many roles our staff play and how they impact the lives of the people we support. It is humbling and inspiring.

Monarch recognizes the impactful role DSPs play in the lives of the people we support. DSPs make up 54% of our total 1,539-member Monarch staff across North Carolina. A general definition of DSPs is “individuals who work directly with people with physical and/or intellectual and developmental disabilities (I/DD) with the goal of assisting the individual to become integrated into his/her community or the least restrictive environment.” In actuality, their role is so much more.

Visitors cannot mistake Joanna’s undeniable and palpable connection she has with the people she serves.

A DSP with Monarch for over two years, Joanna understands what they need even without words. They confide in her their struggles, worst fears and frustrations. They laugh together. They cry together. She prays with them. They call her “Mama Joanna.” Some without family consider her theirs.

She serves 13 people we support on a weekly basis paid for through Supplemental Security Income (SSI), Medicaid or Medicare. Their time together is spent in different ways including helping them with a project within their apartment, as a companion for a shopping trip or accompanying them to a doctor’s appointment. It is up to the individual to determine what they would like to do.

During my visit, Joanna met with Justin, Vickie and Daisy at Monarch’s Eklund Apartments in Greensboro, where individuals with I/DD and mental illness live independently in supervised apartments. She also works as a DSP during the sleep-over, third shift at Monarch’s Pineview, Hope House and Dogwood Circle group homes for people with I/DD. 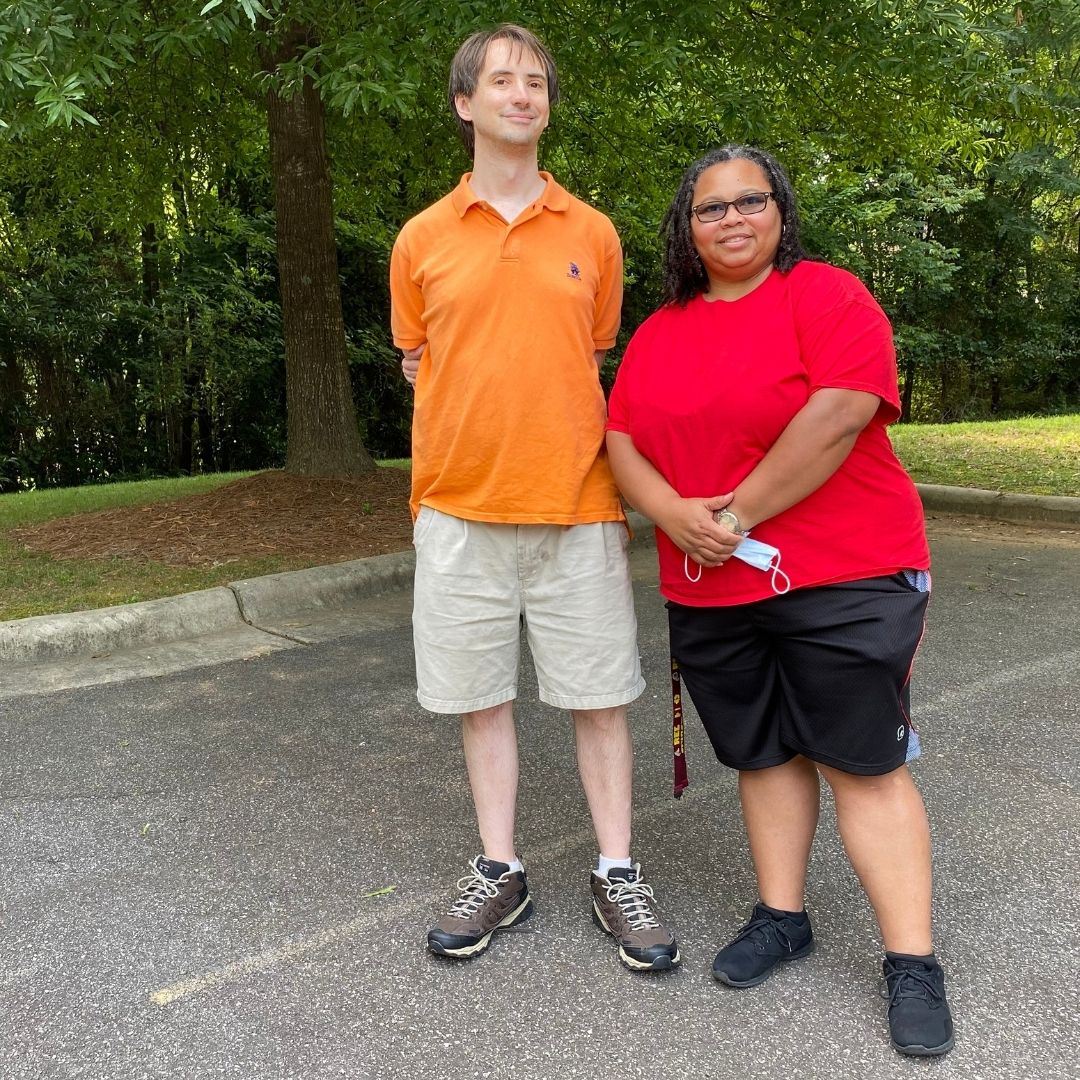 Person supported Justin returns back to his apartment after assistance from DSP Joanna Watson, right.

On the day I visited, Joanna took Justin, diagnosed with autism, to a nearby Target to get groceries and essentials he needed for the next week. During the car ride, the pair talked about what he did during the week and what he planned on purchasing.

She describes Justin as “structured and centered” with a clear vision of what he wants. The pair also discussed plans for one-on-one cooking lessons that have been put on hold since the pandemic’s start since Justin is not comfortable with visitors to his apartment.

The second person supported, Vickie, was ready to go and armed with a plastic bag full of colorful bracelets that she made to distribute during her outing. Joanna asked Vickie where she would like to go and the bank and the grocery store were requested. “I love to go to the grocery store with Joanna,” Vickie announced.

The pair laughed often and talked about healthy food choices, plans for the weekend and what exercise she has done during the week. Walking through the grocery store, Joanna keeps track of the purchases to help Vickie stick to her budget.

Another person supported, Daisy, confined to a wheelchair, knew that Joanna was destined to be her DSP. She calls Joanna, “very supportive, friendly and caring.”

“She has a heart of gold,” Daisy said, adding that Joanna has an angelic heart and has been a strong support since she struggles with depression and a past abusive relationship. 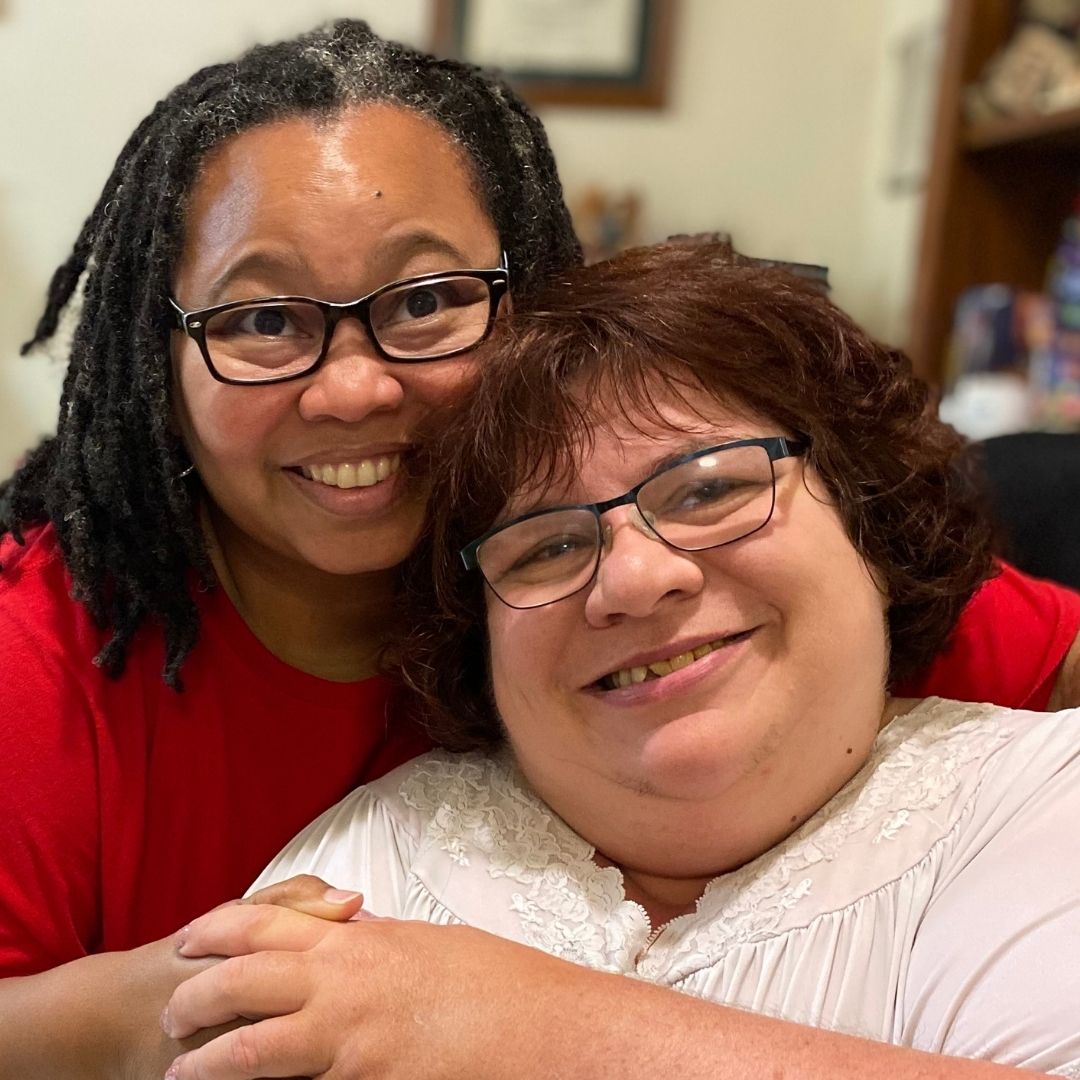 Joanna will tell you she fell into the DSP role accidentally. During her great aunt’s final years suffering from dementia, she was her caregiver when no other family members would. Following her death, the DSP role at Monarch became available and she accepted.

A proud “MeMa” to three adopted daughters, two aged 7 and the third 6-years-old, Joanna’s life is full, hectic and something she would never trade. She juggles her family’s needs, her DSP role as well as her position as pastor at Wave of Glory Evangelistic Ministries in Asheboro.

The good times are sprinkled with loss. Her best friend passed away due to COVID-19 in March and she admits she is still grieving. “Some days are better than others,” she said.

At the end of the day, what is Joanna’s hope? “My hope is that I can inspire or encourage them to be the best them that they can be within the abilities or the capabilities that they have been granted and or afforded. If a kind word I can share or praising them for something they have accomplished or simply helping them to move forward, then I feel like I have done my part,” she confided. “I live with this slogan, that says if I can help somebody along the way than my living is not in vain. I am happy if I can just help them in any kind of small way that will cause them to be better.”