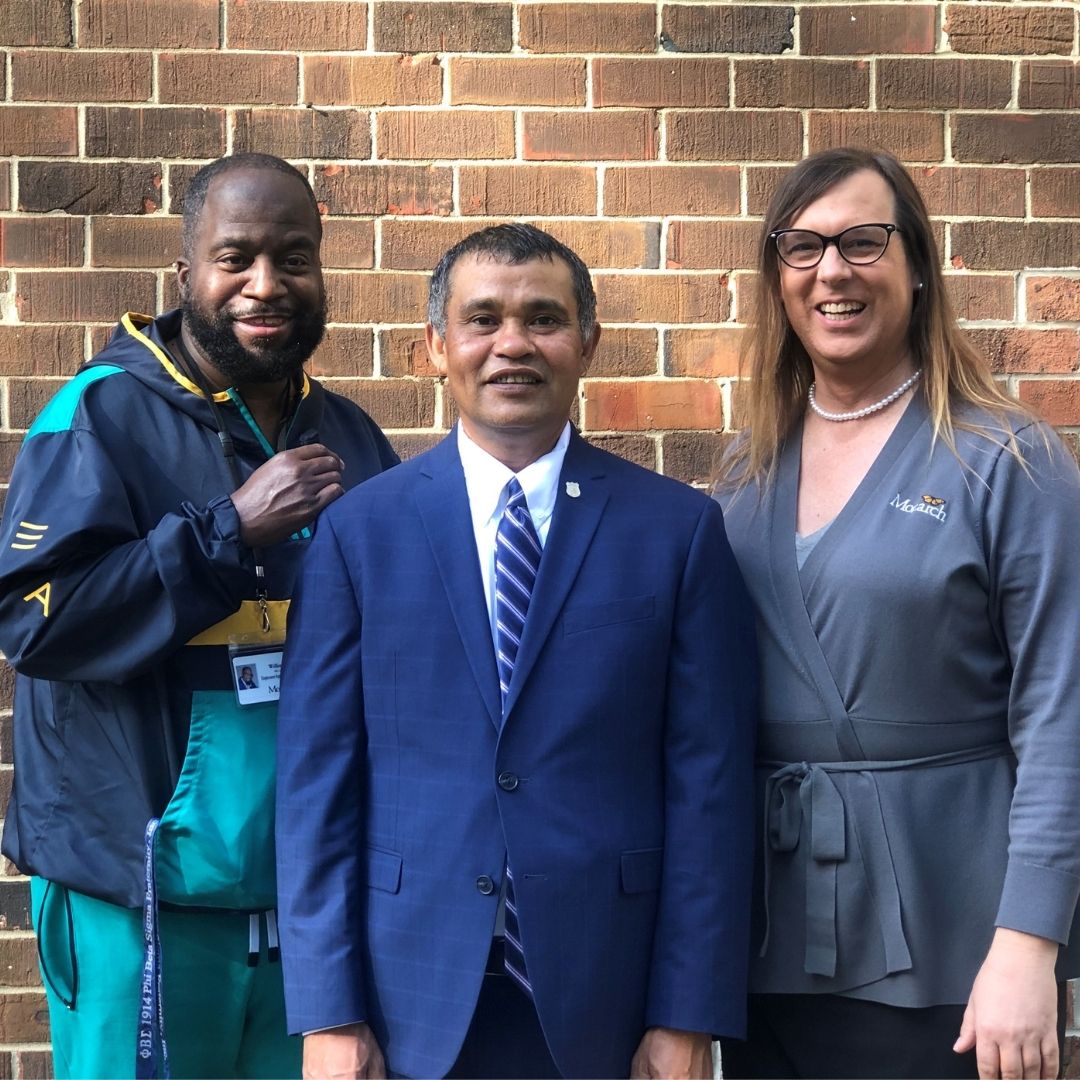 Thein is proud of his perseverance through mental health diagnoses as well as acquiring and maintaining employment. He is pictured here in the center, with Employment Support Professional William Purvis, left, and Employment Peer Mentor Marcilla Smith, right.

Emmanuel Thein moved to the U.S. in 1997 searching for a better life and to escape violence in his home country of Burma, also known as Myanmar.

A resident of Raleigh, he has found support and employment in his U.S. home. He has fulfilled dreams and is looking forward to the future and achieving more life goals. Searching for peace and healing, he has found it here.

He was 26 years old when he fled to the U.S. More than 20 years later, Thein still works at assimilating to the country he now calls home. His friendly demeanor and bright smile hide the trauma he endured growing up in a war-torn country.

Purvis says Thein does not like to speak about growing up in Myanmar. He was recruited as a child soldier and surrounded during his youth by violence. Fleeing to America, Thein experienced many cultural differences and tried his best to acclimate to a new way of life.

Prior to working with the IPS team, Thein was diagnosed with schizophrenia disorder, bipolar disorder and post-traumatic stress disorder (PTSD). While receiving Monarch’s behavioral health services, Thein was referred to the Wake IPS team for employment assistance.

Purvis, who started working with Thein last April, and Smith collaborate with him not only on employment assistance and strengthening life skills, but also how to best cope with cultural disparities. Thein, even though in the U.S. for over two decades, has a strong accent which makes it difficult to understand him when he speaks English.

Purvis, who is also a pastor and has done mission work in Africa, came to assist Smith in communicating with Thein. Smith taught him how to complete job applications online and learn how to best communicate with managers who would conduct the interviews. Purvis helped role play certain workplace scenarios so that he can appropriately respond and interact with co-workers.

“We work to overcome those anxieties and to identify where are the places that he has natural supports that will benefit him and overall help him reach the goals he has outlined for himself,” notes Smith.

In April, Thein succeeded in an interview and was hired by a McDonald’s close to where he lives in Raleigh. Thein either walks or takes the bus for the 15-minute commute to work and typically works about 20 hours per week.

Purvis said his cultural differences didn’t stop the staff at the McDonald’s from taking him under their wing. Purvis, who often stops to check on Thein at work and offer support, said he is well-liked and known by many customers.

When Thein initially began working at McDonald’s he was tasked with light chores. “Now he is all over. He is cooking, cleaning and the staff loves him,” Purvis reports.

Purvis continues to work with Thein on communication skills and reaching out to people of all races and cultures. “He struggled at first, but he is doing great now,” Purvis says.

Purvis, who outside of his role on the IPS team at Monarch also helps people being released from prison to find employment within their communities, works under the philosophy of treating others with respect and dignity. “You have to meet the person where they are and leave them where they are until they are ready to accept support. Treat everybody like an individual and like a human being in spite of their mental health diagnosis. I always say mental health is an overreaction to life. Some people can’t handle life and need a little counseling,” he surmises.

Employment has helped Thein build confidence and life skills as he moves forward. He shares that seeing an Asian-American take office as Vice President Kamala Harris has spurred desires to pursue public service in some way.