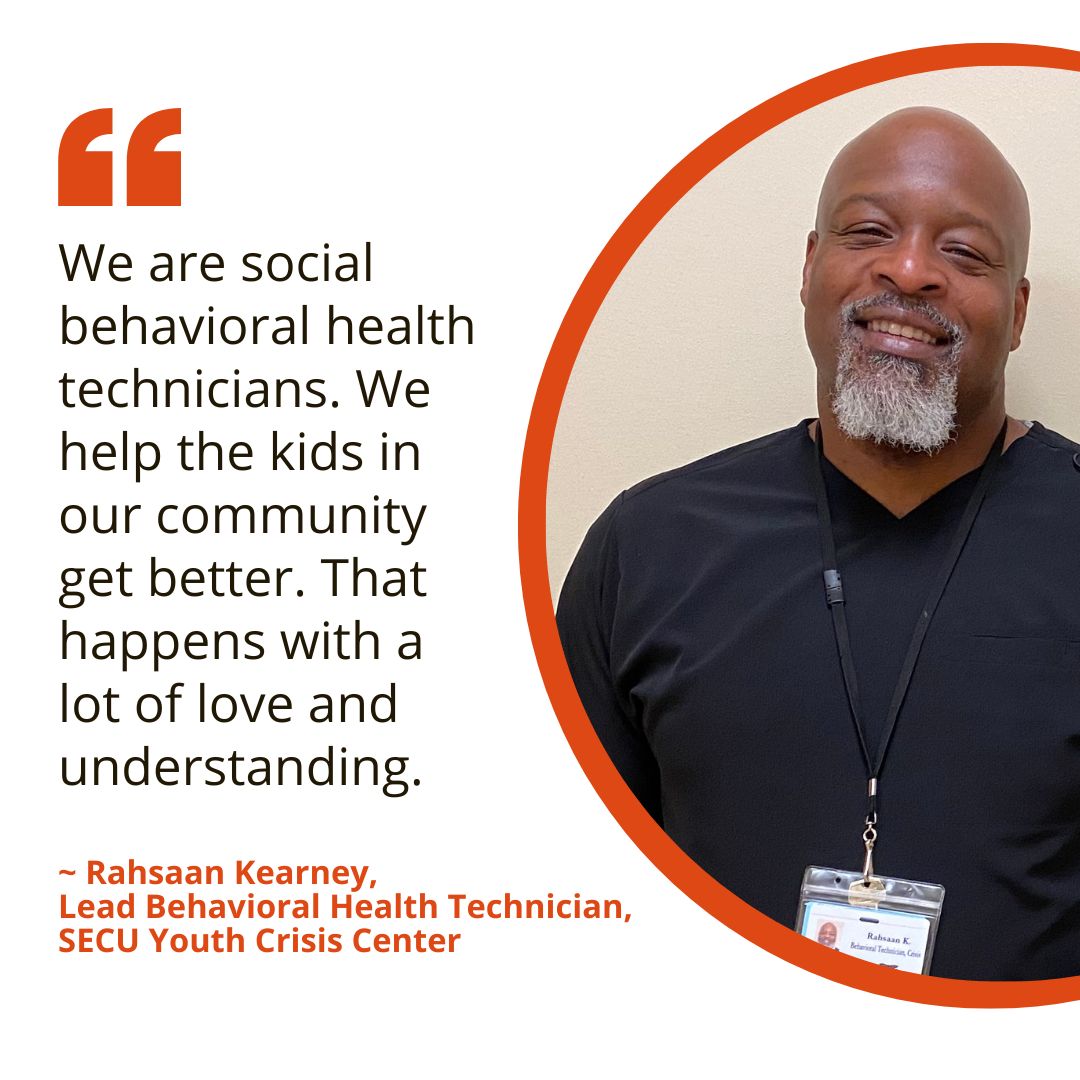 Rahsaan Kearney’s most distinct childhood memory is waking up to glass breaking. He quickly realized it was the sound of an intense physical struggle between his dad and his mom, Louise. “I remember that moment like it was yesterday. My dad was very abusive toward my mother,” he recalls.

As a 5-year-old, he wanted to protect his mom as best he could. He remembers jumping on his father’s back thinking he could somehow stop the violence. He was thrown into a wall. “I didn’t understand how much that moment would affect my life,” he says.

Today, Rahsaan serves as the lead behavioral technician at the SECU Youth Crisis Center (YCC), a Monarch program in Charlotte, and part of the center’s staff who work together to assist children through a mental health crisis. Children seek treatment through the YCC for a variety of mental health issues such as:

The YCC provides short-term stabilization treatment for children and adolescents between the ages of 6 to 17 who are in a mental health or substance use crisis serving youth from Mecklenburg and surrounding counties, and often from many areas across North Carolina.

The pain he endured, and still remembers today, is similar to what youth seeking support at the YCC may experience. He believes his life experiences have provided him valuable insight on how to empathize with children healing through a mental health crisis. “Each child that I come in contact with, I feel I can make an impact. We do a lot of one-on-one and group conversations. To be honest, every kid that we come in contact with has left a little better than they came in,” Rahsaan says of Monarch’s mission.

Growing up most of his life in the Williamsburg, Virginia, area, his mom tried to move the family away from his father who continued to be abusive. Young Rahsaan kept inside the violence he witnessed between his parents.

Rahsaan is appreciative of the many family and friends in his life who became life-changing mentors including his grandfather, his stepfather and a young man, Kenny, he was paired with through the local Big Brothers Big Sisters organization. These relationships proved important throughout his life.

Moving Toward a Career Supporting Children

During his high school years, he began to play football. He attended several colleges playing football while he studied psychology and early childhood development. He left college to play in the National Football League’s (NFL) European division returning from overseas to play for the Carolina Rhinos team in the Arena Football league. He was holding on for a break in the NFL. Life plans didn’t work out that way.

Following his football career, he worked at a Western North Carolina home for people with intellectual and developmental disabilities: “As much as I have been through, I have always had someone helping me through my journey so it was my obligation to give back. This planted the seed to work with children.”

Rahsaan speaks honestly with the youth he serves about the trauma he has weathered. “When you have been through extreme pain and poverty and violence, it’s a look that we have. Children can see it in me and I can see it in them. I think that is why they don’t give me a hard time,” he says.

His intentions are that sharing his experiences will give them hope to grow, heal and move on. He tells them it may not be easy but to remain hopeful.

It can be difficult, Rahsaan confides, so he chooses to focus on one child at a time. “I don’t feel like I am working. This is a job that I enjoy. I enjoy being part of change and helping,” he says of working with youth and the YCC staff. “We are social behavioral health technicians. We help the kids in our community get better. That happens with a lot of love and understanding.”

For more information and a virtual tour of the YCC, visit here or call (866) 272-7826 for more information. The YCC operates 24 hours a day, seven days a week. For career opportunities at Monarch’s SECU Youth Crisis Center or locations throughout North Carolina, visit the careers page.