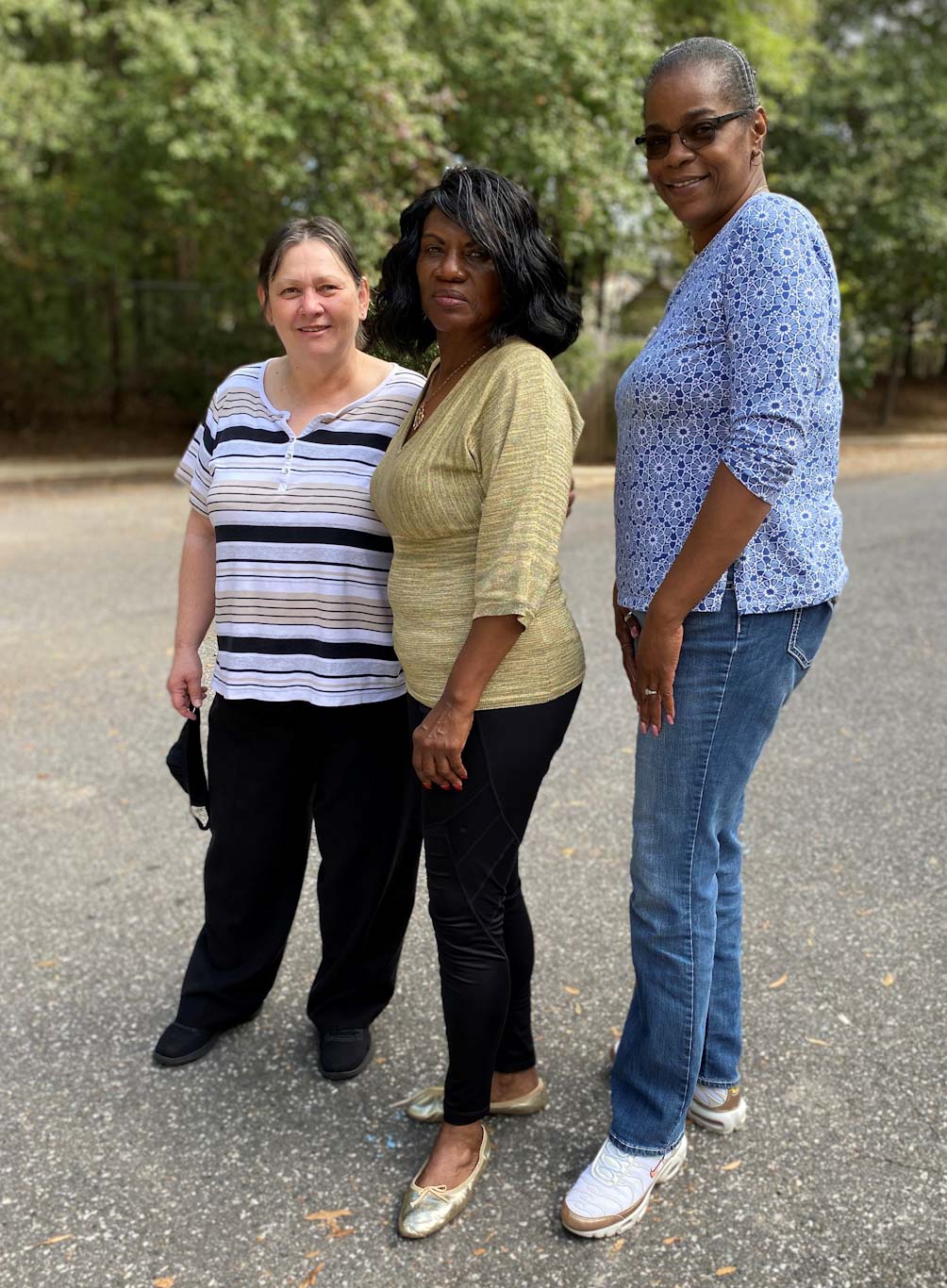 Travis Adams was held tight in the grip of a cocaine addiction for several decades. She described the drug as a “monster” while sharing her substance use recovery experiences. On her thirty-fourth birthday a boyfriend introduced her to the drug and she soon became addicted.

Cocaine took charge of her life until she was 55 years old. It stole a marriage. It severed loving relationships with her siblings and daughters. It made her try to take her own life. It almost claimed being grandmother to her six grandchildren. “I chose crack and that world and I take full blame for that,” shared Adams, 59.

Adams, a resident of Monarch’s Grand Oaks supervised living apartments in Gastonia, is working daily at substance use recovery and healing from a diagnosis of schizoaffective and bipolar disorder.

The supportive staff and fellow residents at Grand Oaks help, along with members of Gastonia’s Friendship Christian Center, accompany Adams on her healing journey. Her life today gives her hope in her tomorrows thanks to the diligent work she is doing to heal mentally and pursue recovery.

Sharing Her Story of Hope

Monarch provides supervised living services to nine other residents who have mental health or intellectual and developmental disabilities at Grand Oaks, which is nestled in a peaceful wooded setting.

Director of Program Operations, Long-Term Services and Supports, Nancy Kaierle said when a person is healing with the help of Monarch services, like Adams, sharing her successes can profoundly impact others experiencing similar circumstances. “Her story is inspirational and she has made such great gains in her life,” Kaierle remarked.

Adams is currently studying online to become an ordained evangelist through Spirit Flows Ministerial Academy and this summer she will work toward an associate degree in Biblical Studies from Colorado Christian University. Adams will tell you it is God who saved her and works through her, often sharing her story of struggle and redemption at Friendship Christian Church where Bishop John McCullough has helped her.

While working to overcome the substance use disorder, Adams was homeless, residing for a time at the Salvation Army shelter before accepting an invitation from a fellow church member who offered her a room until she acquired permanent housing. The opportunity to call Grand Oaks home became available in the spring of 2019 and she has been there ever since.

She testifies that recovery is a “heavy road to travel” but she has found faith to be a critical part of her personal journey. “Without God and my spirit it would be hard to fight. So it is a battle everyday that you go through with spiritual warfare . . . It didn’t matter until I let God step in. It didn’t matter how much my family complained,” she said of eventually receiving treatment through substance use rehabilitation. 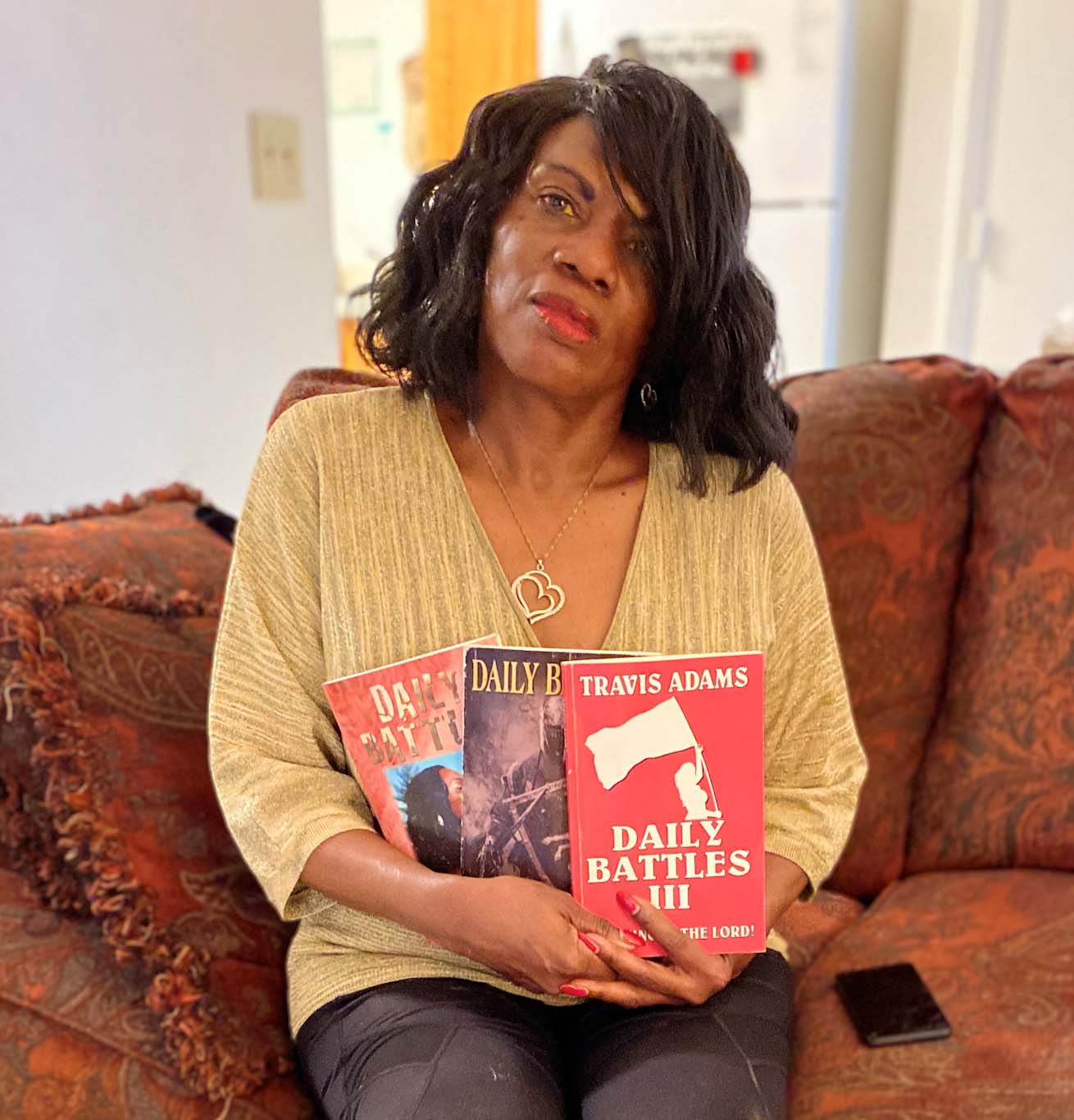 Author Travis Adams holds her first three paperback publications and is finishing writing her fourth book titled, “Divine Intervention,” which will be a hardback publication.

Today, Adams is a published author who is working on her fourth book titled, “Divine Intervention.” One of six brothers and sisters, Adams said she is most proud when her family acknowledges her accomplishments and work toward sober living. She recalled a phone call from a brother who reached out. “He told me he is proud of me and that is an awesome feeling,” Adams recalled.

Adams affirms that Monarch staff that includes Residential Team Leader Angela Pitcher and Behavioral Specialist Tammie Rorie at Grand Oaks offer compassionate guidance. Pitcher, whose professional background includes 26 years as an addiction counselor, said Adams’ story gives her hope: “Being able to see someone like Travis take that addiction and turn it into something positive, is what makes counselors ecstatic. It’s not up to us how they do it, it’s up to them.”

Rorie began as part of the Grand Oaks staff a month before Adams. Thinking back two years ago, Rorie is in awe of the transformation that has taken place for Adams: “Once she opened up, she became the beautiful person that she really is . . . . She has been amazing, helpful to others, a very helpful spirit.”

What has Adams learned on her journey? Adams said she continues to grow every day and works at being patient, calm and to think before reacting to a situation. “When you live in a community where everybody cares about everybody – and loves everybody . . . this is a decent community that is good. I have grown to learn to be grateful for what I have and take care of it,” she observed.

Whatever difficult situation arises there is always hope, Adams confirmed: “I was a crack addict . . . I am merely human. I want you to know that I am just like you. I can look back at who I was and know that I am better than that today and that is exciting.”

We Are Here to Help

Please call us if you want to find out more about the services available in your area.

Or, if are you interested in finding out information on mental health topics such as depression, anxiety, suicidal ideation or attention-deficit / hyperactivity disorder, we have several resources available for download by filling out this form.

Fill out this short form to download available resources.