Kim Howard Reflects on Her Journey: “I’m in a good place.” 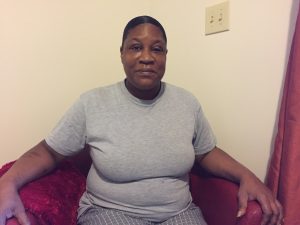 When we last spoke with Kim Howard, she was living in transitional housing in Charlotte.

Since then, she has moved into permanent housing, an apartment in South Charlotte.

“I love it! This is my safe haven,” Howard said of her apartment. She’s been living there for a year now.

Howard was rear-ended by a semi-truck on her way home from work in October 2014. She survived, but was left with a traumatic brain injury (TBI). Her ability to speak was severely impaired, she suffered memory loss and conversion disorder. Beyond her physical injuries, Howard was faced with losing her job and her home, and was forced to stay in a homeless shelter.

“My overall life has improved very much now that I have permanent housing. I’m in a stable place. I don’t have to worry about looking over my shoulder or being in a shelter or not having anywhere to stay.”

The move to South Charlotte put her further away from her relatives, but she sees them even more now. Howard’s relative visit her more often and many times will pick her up so she can stay with them for visits as well. The light rail is a short walk from Howard’s new home, which she uses to visit her family and get to her appointments.

“[The light rail] is an awesome thing to have near me. Now that my foot is broken, I can’t venture up the street like I was doing, but the light rail is awesome. I can’t wait until it connects to the University area so I can visit my family there and they can just pick me up at the station.”

Howard had a fall in her kitchen a couple months back that broke a couple bones in her right foot and required surgery. She’s now in a walking boot, but isn’t letting that derail her progress.

“I’m getting physical therapy right now and just taking it day-by-day. I’ll be able to walk back up to the light rail in a couple months or so.” Howard is relying on the coping skills she’s learned through her recovery process with Monarch to get through this new challenge, as well as something she’s experienced before: the winter blues.

“I get depressed this time of year, but I’m in a good place. I have so many coping skills and things I can do to get my mind off it. I can use white noise, I can take shorter walks, even if it’s just to the mailbox so I can breathe in fresh air and let out sighs of relief.”

Yoga is another skill Howard has been using, although she has altered some of her moves to accommodate her foot during the healing process.

“I do it at home by myself, I have a mat and everything. I go on YouTube and I use the videos there. I can’t do the lotus, but I can do a lot of stretches which are good for me.”

Howard continues her treatment at Monarch and is staying focused on her short-term and long-term goals, from losing 15 pounds to starting her own business one day and eventually owning a home.

“I have small goals that lead to big goals. I have a goal of owning a home, so I’m starting to work on getting back to work first and other things to help me even if it’s going to school. I have to start small to get to the bigger picture. It gives me something to look forward to, something to wake up to, something to fight for. You never know what can happen, but I know one thing, I’m happy right now.”